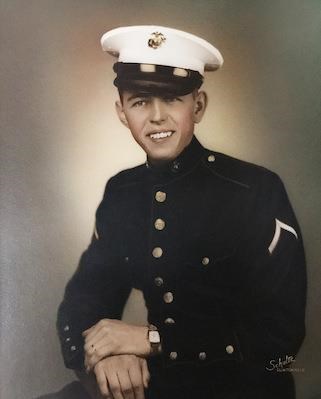 New London - Forest "Butch" Lee Kreklow, 89, of New London Wisconsin passed on and joined his wife on the 23rd of December 2020. He was born on May 24, 1931, in Oshkosh, WI to Henry and Elvira (Henschel) Kreklow. On August 18, 1951, he was united in marriage to Arla Mae Splitt at Saint Paul Lutheran Church, South Dupont, Waupaca County. The couple began their journey through life on the Kreklow family farm in Bear Creek, Wisconsin. Just after marriage, Butch was drafted into the United States Marine Corps in support of the Korean Conflict. Fortunately for him, he was assigned to Marine Corps Depot of Supplies in San Francisco, California where Arla was able to join him. Upon their return to Bear Creek, Butch worked on the farm and went to trade school at night to establish his career and build their new home and life in rural Manawa on the Little Wolf River. He was a member of Zion Lutheran Church in Manawa, where he volunteered and served his church with Arla for decades. He started working for Bartelt Insulation in the mid-60s and retired from the company in 1996. A proud member of Heat and Frost Insulator Local 127 throughout his career. In his younger days, Butch and his brother Jim enjoyed playing baseball and ice hockey in the local town of Symco. He graduated from Manawa High School class of 1948. His love of the outdoors and nature was with him for his lifetime. He was a talented sportsman and looked forward to Deer Hunting Season every year. Just as important, he was an avid fan of the Green Bay Packers and the Milwaukee Brewers. He enjoyed all Wisconsin sports. His gardening ability produced quite the bounty and was shared by friends, family and neighbors. Living on the Little Wolf River and fishing on the Manawa Pond made for competitive family fun, often being beat by Arla who taught him how to fish. Butch and Arla's selfless service in support of the Manawa Fish and Game Club was a lifetime commitment to care for the members and the Club. Butch spent countless hours building the new clubhouse with Jerry Koss and Scott Stevens. He served as President and Treasurer for many years and enjoyed the camaraderie and competition of friends and members alike. Butch is survived by his children: Kitty Rae (Ronald McCannon) of Phoenix Arizona, Kathi Lee Kreklow (Tracy McLean) of Butte Montana; his grandson Kevin Forest McCannon of Phoenix Arizona and many other nieces, nephews, other relatives and friends. Butch is preceded in death by his wife Arla, his parents Henry and Elvira and his brother James "Jim" Kreklow.

The family wishes to thank all the doctors, nurses and emergency room personnel at St James Hospital, Butte, Montana for the wonderful care provided to our father. We would also like to thank the personnel from the Washington Center, New London, Wisconsin and The Springs of Butte, Butte, Montana for their care and compassion throughout our father's illness. A special thank you to Shawn and Michael Gretzinger, and Micki Rivers for the love and support they provided our father during his illness and throughout his life. Thank you to all the family and friends that reached out to provide love and support. A note from Butch's grandson: The loss of my grandfather has affected the lives of all those who have had the pleasure of knowing him. It is impossible to put into words the amount of happiness my grandparents brought to the lives of others. My mom always described her father as a special guy and I am thankful to have had the privilege of being his grandson. A note from Butch's daughters: Our hearts are broken. Dad put his family first and was always there with kind words and a helping hand. We were blessed to have the greatest dad ever and a wonderful loving mother. Our parents were an inseparable team, bound by love for 67 years of marriage. Both will be sincerely missed. A Memorial Service for Butch will be held on Friday, July 23, 2021 at 1:00pm at Zion Lutheran Church in Manawa with the Rev. John Hielsberg officiating. A visitation will be held at the church from 12:00pm until the time of the service. 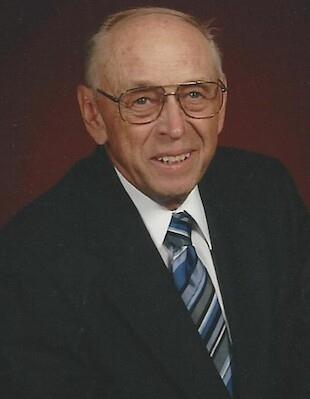 Published by Appleton Post-Crescent from Jul. 12 to Jul. 18, 2021.
To plant trees in memory, please visit the Sympathy Store.
MEMORIAL EVENTS
Jul
23
Memorial service
1:00p.m.
Zion Lutheran Church -Manawa
157 N. Bridge Street, Manawa, WI
Funeral services provided by:
Cline-Hanson-Dahlke Funeral Homes -Manawa
MAKE A DONATION
MEMORIES & CONDOLENCES
Sponsored by Cline-Hanson-Dahlke Funeral Homes -Manawa.
1 Entry
I had the pleasure of knowing Butch when he worked as an insulator. I was the secretary at Bartelt Insulation in the 70's and we talked weekly. He was a wonderful man in his community! God bless your family.
Jean Reed
July 18, 2021
Showing 1 - 1 of 1 results