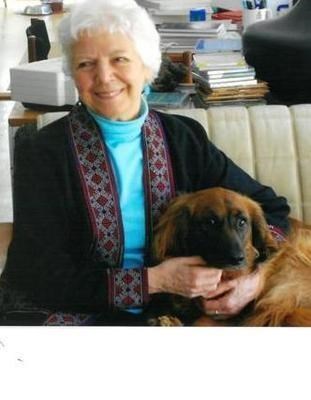 Janet Dee Wullner-Faiss Cloak died at her home on August 9, 2017 at the age of 84. She leaves behind many friends and colleagues, a large family of siblings, nieces, nephews, their spouses and children, and Matisse and Sashay, her beloved cat and dog. She was previously married to Fritz Faiss, a German-American artist and more recently to Ted Cloak, Professor Emeritus at Lawrence University. Ted and Janet initially met in the 1950's when Janet was a theater and drama major at Lawrence University.

Janet was artistic, private, funny, talented, and unique. Her art has been shown throughout the United States. She was a great supporter of the arts, conservation, and multiple humanitarianism organizations.

Janet was born in Manitowoc, Wisconsin. When she was 17, her parents and her siblings moved to California while Janet attended Lawrence University. After college, Janet travelled to New York to study acting, oral interpretation and dance. In 1958, Janet moved to Palm Springs, California where her parents and youngest sister relocated to after a stint in Europe. There she became the Associate Director of the Palm Springs Desert Museum where she worked to bring art and science together under one roof. She introduced artists such as Paolo Soleri, John Burton, and Fritz Faiss. Janet and Fritz married in 1966 and they began teaching at CSUN in Hawaii and at Esalen in Big Sur on the California coast.

A few years after Fritz's death in 1981, Janet moved back to Appleton. She was involved in a many organizations, featuring music and poetry, the Outagamie Historical Society, the Appleton Public Library, Town and Gown Book Club, and Torch International. Shows of her art were exhibited at the Appleton Art Center, the Trout Museum of Art, and the Wriston Art Center at Lawrence University.

At Janet's request, there will be no funeral services. Please celebrate her life in a way you think she would appreciate and enjoy if she could join in. Make her laugh.


Published by Appleton Post-Crescent on Aug. 20, 2017.
To plant trees in memory, please visit our Sympathy Store.
MEMORIAL EVENTS
To offer your sympathy during this difficult time, you can now have memorial trees planted in a National Forest in memory of your loved one.
MAKE A DONATION
MEMORIES & CONDOLENCES
Sponsored by the Appleton Post-Crescent.
2 Entries
A woman with many talents and accomplishments, Janet was always interested in trying new things, like Gamelan. It was so good to have her as part of our group!
Barbara Westhofen
August 25, 2017
Janet was a talented and beautiful humanitarian.
I am grateful to have known her and to have enjoyed her wit and charm.
Linda Rice
Friend
August 22, 2017
Showing 1 - 2 of 2 results