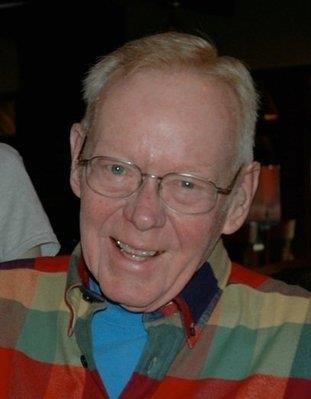 He spent his early years in Geneva, NE, before moving to Caro, MI, where he lived during his teens. He graduated from Caro High School.

Jack attended Michigan State University as a music major before completing his pre Med degree at Alma College. He went on to graduate from the University of Michigan Medical School. He was a musician, an Obstetrician/Gynecologist and after retirement he spent many hours in gardens - growing vegetables for the area food pantries and Homeless Connections in Appleton.

Jack and his wife, Georgiana, met and formed a Redhead's Club at Michigan State University in the mid-1950s; they would have celebrated 60 years of (mostly) wedded bliss on August 19, 2016. Their Redhead's Club grew to include three daughters: Rebecca Leigh Kaehr (Corby Roberson) now living near St. Paul; Susan Antoinette Harris (Kenneth Seidl) in Dayton, OH; and Ann Elizabeth Taly (Jack Taly) - also in the St. Paul area. He also will be remembered by five grandsons and four great grandchildren. His younger sister Anita died in 1982 and his older sister, Marilyn lives in Michigan. He had six nieces and nephews - five of which are in the medical fields - as are two of his daughters.

As a physician he would like to be remembered for his innovations. They included allowing fathers in delivery rooms and operating room for C-sections, laparoscopy for tubal ligations, masterminding a Fertility Clinic and delivering the first in vitro baby in the Fox Cities. He has donated his body to the University of Wisconsin Medical School in Madison.

He was very active in the Congregational United Church of Christ in various capacities, the Appleton Y's Men Club, the Fox Valley Symphony and was the first male member of the Wednesday Music Club.

A memorial celebration of his life will be held at 10:00AM on Saturday, August 6, 2016 at the First Congregational Church in Appleton, WI. A visitation at 9:00AM will precede the celebration. In lieu of flowers, please consider donations to riverviewgardens.org in Appleton.


Published by Appleton Post-Crescent from Jul. 17 to Aug. 6, 2016.
To plant trees in memory, please visit the Sympathy Store.
MEMORIAL EVENTS
Aug
6
Celebration of Life
10:00a.m.
First Congregational Church
Appleton, WI
MAKE A DONATION
MEMORIES & CONDOLENCES
Sponsored by the Appleton Post-Crescent.
21 Entries
Thanksgiving Day 50 years ago Jack delivered a baby boy at Fort Riley. Remembering that day I googled jhis name and came upon the obituary. My I extend my sympathy,

Lorann Stien
Eau Claire, WI
November 23, 2017
Dr. Harris was a sweet and caring doctor. He did surgery on me many years ago and made my life so much better.
You can be proud of him.
I knoe he will be missed.
Sincerely, Alice Claypool
August 9, 2016
My heartfelt condolences to all who mourn the passing of this talented and amazing man. My fondest memory of Jack is when we cried together in the nursery at AMC. A patient , a co-worker, we rejoiced in the birth of the baby my husband and were to adopt. Not the outcome we all hoped for, but certainly the right outcome. Glad he came by that night. It was a good cry filled with memories and hope. That comforts me as many of you will be comforted by your special memories!
Sue (Russler) Steinbruecker
August 4, 2016
So sorry for your loss. Thoughts and prayers are with you all.
Haas'
July 30, 2016
Deepest sympathy to Becky, Susan and Ann in the passing of your dad. Hope you remember great memories and story telling. Sympathy to your mom too.
Amy (Brown) Van Elzen
July 30, 2016
We arrived in Appleton in the late '70s and got to know Jack (and Georgie) through musical circles. I am sure that Jack played harpsichord for us in several performances at the Congregational Church. I also knew Jack in the OB realm as I taught childbirth preparation classes at AMC. Not long ago we walked by the Harris home overlooking the Fox, his beautiful gardens and spoke of this fine couple. Deepest condolences to all who love and admire him. ~ Joanne and Ken Bozeman
July 23, 2016
Dr. Harris helped me have my miracle baby Jina in 1974. He also encouraged me to "room in" (be the first mom to have my baby with me in my hospital room at AMC). He allowed me to have my baby without anesthesia or a C-Section even though she was a footling breach because I insisted on a natural childbirth. He was kind and gentle and I will always remember him with respect and gratitude. God bless you on your journey, Dr. Harris.
Kathleen (Jonen) Marsh
July 19, 2016
Dr Harris was a very comforting and compassionate obstitrician...I know him through my own OB doctor, GW Savage. I have a large family thanks to the skills of these two MD"S. My condolences to Dr. Harris' family and his close friends on their loss... My prayers are with you...
KRISTIANE DIETZ
July 19, 2016
Dr Harris delivered my only Son! He was an amazing man and I will always remember his kind and patient heart. So sorry for your loss. Thoughts and prayers.
Terri Nilson
July 19, 2016
The community will miss Jack Harris. Jack was my doctor for decades and also my friend. In later years I didn't see him often, but when our paths once again crossed, his ready wit was always there. Jack Harris is, and was, a delightful man.
Linda Kaehr
July 18, 2016
Condolences to the family of Dr. Harris. He delivered three of my babies and followed me through 4 pregnancies. Best Doctor ever.
Judy
July 18, 2016
Many years ago, our first child was born silent. Our next two had similar complications, but were OK. We chose Dr. Harris for our last child. She had the very same complications as the first, and Dr. Harris saved her life! We will be forever grateful for his actions that day. Our sincere condolences for the loss of this amazing man.
Ruth & Bruce Kieffer
July 18, 2016
Harris Family - God Bless this wonderful man who helped bring my daughters into this world safely. May you all find comfort in the memories he leaves behind.
Tammy Gosz
July 18, 2016
Dr Harris family..RIP dear Dr Harris. I worked Pharmacy many yrs. Always a pleasure to hear from Dr Harris.A brillant man
Betty Treleven
July 17, 2016
Memories of Jack and a few games of golf and fellowship at NS. Godspeed.
Dan Thome
July 17, 2016
I remember Jack from my contacts with him both socially and professionally. His wife, Georgie, was my best friend and neighbor for many years when I lived in Appleton, and Jack teased us constantly about the crazy/fun things we did together. I also wrote the computer software for the Fertility Clinic and was able to see the side of him that was so compassionate and attentive to his patients. He leaves a legacy that's to be treasured by many.
Patti Cole
July 17, 2016
Remember Doctor Harris as the one who delivered by 3 older boys back in the late 60s, early 70s he had a wonderful manner about him he was a very good person, may he rest in peace and my condolences to his family
Margaret Fairchild(Selig)
July 17, 2016
I remember Dr. Harris as a supporter and mentor and when I joined my father, Dr. Simon Cherkasky, in practice. He had a calm demeanor and I admired him as a physician. That era of local physicians is almost all gone and they all are missed! My deepest condolences.
Alan Cherkasky
July 17, 2016
So very sad. The world lost a truly great man in Jack Harris. That tennis quartet of John, Bruce, Arthur and Jack is now complete. Much love for Ann, Susan, Becky and my second mom.
Erica Heyl
July 17, 2016
I'm so sorry for your loss. What a legacy he left. My prayers are with your family.
Ruth Wall
July 17, 2016
I'll miss Jack's devilish chuckle. Also his kind compassionate manner. Carol Heyl
Carol Heyl
July 17, 2016
Showing 1 - 21 of 21 results