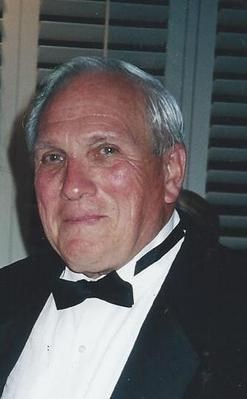 Age 79, passed away on Thursday, July 4, 2013 at Parkside Care Center in Little Chute. He was born on April 2, 1934 in the Town of Holland, son of the late Thomas and Margaret (Hart) Brick. Terry was employed as a lift truck operator for 42 years at Thilmany Paper Mill until his retirement. He was a member of the Kaukauna Lions Club and a past member of the Kaukauna Athletic Club. A sports enthusiast, he enjoyed watching the Packers, Badgers, Brewers, and the Boston Red Sox.

The Mass of Christian Burial for Terry will be held at 11:00 AM on Thursday, July 11, 2013 at ST. CLARE PARISH @ ST. PATRICK CHURCH in Askeaton with Fr. Dennis Bergsbaken celebrating. Full military rites will follow the mass. Burial will be in St. Patrick Cemetery in Askeaton. Friends may call at the church on Thursday from 9:00 AM until the time of the mass. www.boettcherfamilyfuneral.com

The family wishes to express their gratitude to the staff at Parkside Care Center, Dr. Paul Russo of the Kaukauna Clinic, and Dr. Avi Bar-Lev of Fox Valley Hematology.

Published by Appleton Post-Crescent on Jul. 6, 2013.
To plant trees in memory, please visit the Sympathy Store.
MEMORIAL EVENTS
To offer your sympathy during this difficult time, you can now have memorial trees planted in a National Forest in memory of your loved one.
Funeral services provided by:
Boettcher Family Funeral Home
MAKE A DONATION
MEMORIES & CONDOLENCES
11 Entries
Our sympathy for the loss of your father and the grandfather of your children is sincere and we keep you in our prayers. Thrive on your memories and smile about the good times.
Mary Peterson
July 9, 2013
Dear Kevin, Tom, Kerri and Tiffany, I am so sorry to hear about your Dad. I have many fond neighborhood memories of him, and of recent years when he would come to the Lox Club. He was a very nice man and I always enjoyed seeing him. My heart is filled with sympathy for all of you.
Louise Becklund (VanderVelden)
July 9, 2013
Uncle Terry and all the Brick/Demerath families are in my mind and heart right now. God Bless you all!
Susan Lallak
July 8, 2013
Remembering all the fun times from years ago! Our deepest sympathies from your friends in Gurnee, IL.
Bronco, Cindy, Kathy, Carrie and families.
Cindy Munda
July 8, 2013
Please accept our sincere condolences.. May your memories bring you peace and comfort. Terry was a memorable patient. Dr Robert Ferrante, Adam Mielke, Vickie Woelfel and Candy Mathew
July 8, 2013
My thoughts and prayers are with you all. My God's caring arms hold you up during your time of sorrow.
Bill & Melissa Gerhartz
July 7, 2013
My deepest sympathy to your families at the loss of your loved one. May The Lord surround you with love and fill you with all the happy memories you shared. God bless and keep you in His arms during this difficult time.
Ruth Mason
July 7, 2013
While we did not know him well, like anyone who met him we developed an instant fondness for Terry. We used to joke about the FBI (those who know him well will know what those letters stand for) and he got a kick out of an FBI hat we gave him. We know that he will be missed very much by all his family and friends, all of whom are better off for having known him. We are friends of Tiffany's from Boston.
Lynne and Gary Smith
July 6, 2013
To the entire Brick/Ortiz family I never met Mr Brick but i know his daughter Tiffany for many many years and I do want to send my deepest condolences to the entire family.so sad and i will pray for you all may the lord give you strength . he is in Gods kindgdom
Bobbi-jo Borges
July 6, 2013
Sorry to hear of Terry's passing. Had no idea he has been ill. Terry was always a nice, friendly guy every time I ran into him. Peace to all of the family & take hold of God's hand as He reaches out to you.
Ginny (Hartzheim) Recla
July 6, 2013
To the Brick family,
So sorry to hear of your loss of a loved one. I knew Terry from working at Thilmany's for many years. Terry always had a little smile on his face and a little story to tell whenever you saw him, he will be missed by the many, many who knew him. Your family will be in my thoughts and prayers. From a fellow co-worker.
Bill Ludvigsen
July 6, 2013
Showing 1 - 11 of 11 results