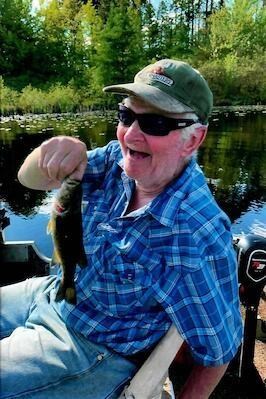 Matteson - Walter "Walt" A. Schaefer, age 74 of the Town of Matteson, Waupaca County passed away at his home surrounded by his family on Tuesday July 20, 2021.

Walter Arnold Schaefer was born on November 25, 1946 in Oconto Falls as the son of the late Robert and Mathilda (Jaeger) Schaefer, Sr. As a young boy Walter moved with his family to the Milwaukee area and graduated from Hamilton High School in Sussex with the Class of 1965. He served his country in the United States Navy where he spent time stationed just off the coast of California. Walter was united in marriage to Carol Bodoh on July 28, 1979 in Matteson. Walter was a member of Christus Lutheran Church in Clintonville. He worked at a number of places throughout his life including FWD Seagrave in Clintonville and more recently at O.E.C. Graphics in Oshkosh prior to his retirement. Walter had a passion for hunting and fishing. He was very self reliant and always seemed to be able to fix anything. Walter was known to tip a cold Hamms or two and had a sweet tooth for chocolate; a vice he loved to share with his grandchildren. He was a crazy "papa", loved his daughter and son-in-law dearly, and was a wonderful husband. Throughout his life Walter always put family first.

Survivors include: His Wife: Carol.

Walter was preceded in death by his parents.

A memorial service will be held for Walter on Saturday July 31, 2021 at 11 AM at the Eberhardt-Stevenson Funeral Home & Crematory in Clintonville with Rev. Brian Crocker officiating. Visitation will be held at the funeral home on Saturday from 9 AM until the time of the service. Military honors will be held for Walter outside of the funeral home following the service by members of the Clintonville American Legion Post #63, VFW Post #664, DAV Chapter #53, and American Legion Auxiliary Unit #63.

Walter's family extends their sincerest thanks to Heartland Hospice; especially to nurse Tina, aide Tanya, and chaplains William and Josh. Your kindness was greatly appreciated. Online condolences can be left at www.eberhardtstevenson.com