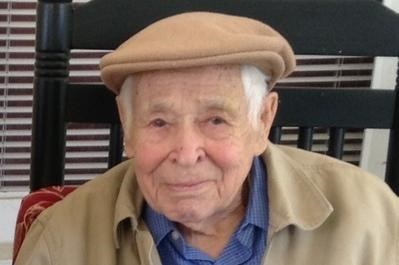 William Alfred Dafoe, 97, devoted husband, father, and physician, died on November 21, in Pacific Palisades, Calif., after a brief illness, while on an extended visit with his son Donald's family.

William Dafoe was born on July 21, 1917 in Wautoma, Wis., the youngest of seven children and the only son. He graduated from the University of Wisconsin-Madison and Harvard Medical School. While in medical school, he met his wife, Muriel, a nursing student at the time, and the young married couple later moved to Rochester, Minnesota, where Dr. Dafoe got advanced surgical training at the Mayo Clinic.

In 1947, the Dafoes and their two young daughters settled in Appleton. Six more children would eventually come along. Over the next decade or so, every family home movie would feature the very same event: bringing home the new baby.

Dr. Dafoe spent the next forty years as a beloved doctor to many families in the greater Appleton area. He was highly trained as a surgeon, but to his patients, he was their "family doctor." He loved his work and his patients. He made house calls; put in long hours, seven days a week; took time to "visit" with his patients about life in general and fishing in particular; and, as was customary for some Appleton doctors in the 1950s, charged $7 for an office visit.

His family was his greatest joy, beginning with his wife, Muriel. She worked by his side in his office as his nurse for many years, enjoying the privilege of helping to care for patients, while raising eight kids in a household where fun was more important than apple pie order. Dr. Dafoe made time with his kids a special and prized occasion. A trip to buy apple cider in the fall or swim at Silver Lake in Wild Rose was as exciting as a trip to Disney World. Even the invitation to ride with him to the hospital was special. (He kept malted milk balls in the ashtray as an additional attraction.) He loved music, dancing, fishing, and the natural beauty of rural Wisconsin.

He and his wife spent many happy and healthy years in Orlando, Florida, where they retired in order to be closer to two daughters, seven grandchildren, and eventually eight great-grandchildren in the area. They were active members of the Orlando Community Church for many years.

A memorial service will be held in Orlando.


To plant trees in memory, please visit our Sympathy Store.
Published by Appleton Post-Crescent on Nov. 28, 2014.
MEMORIAL EVENTS
No memorial events are currently scheduled.
To offer your sympathy during this difficult time, you can now have memorial trees planted in a National Forest in memory of your loved one.
MEMORIES & CONDOLENCES
13 Entries
Just seen this. So sorry about his passing. He was a great man. I had the pleasure of caring for him a few years ago. I was his caregiver.
Doreen M Bendik
Friend
September 8, 2020
Condolences to the Dafoe family. A friend from the past.
Gary Groves
January 5, 2015
On behalf of my mother, Kathryn Newton (nee Jones), and our entire family,
I am extending our deepest condolences. Mom grew up in Wautoma and knew Billy his entire life. He was a very dear friend to her.
Liz Newton
December 30, 2014
Our condolences to the family. A long and wonderful life!
Rollie & Sue Stephenson
December 6, 2014
My condolences to the family members. All who knew the Doctor; have lost a very special man.
Joe Christman
December 5, 2014
Our condolences go out to the Dafoe family. Dr. Dafoe was a great man and a wonderful doctor. When I was a little boy, I remember him staying by my bedside at my parents' home, and I credit him with saving my life. He was a gentle soul & wise in many ways. May he rest in peace.
Bruce Meiers
December 1, 2014
My thoughts and prayers are with your whole family. I have so many wonderful memories of time with your family, Nancy. I remember your dad and his endearing "toilet paper dance!" I remember the importance of winding the grandfather clock. Your parents and your entire family will always have a special place in my heart. There was always so much love in your home! Your Mom and Dad made that happen! Bless you all.
Alice French Keane
November 29, 2014
my mother, Ina Mather, and I used to work with Dr. Dafoe at Appleton Medical Center for many years....always caring for his patients and personable....very good memories..My mom also babysat for their children, including Willem.Our hearts and prayers go out to the family during this difficult time. God Bless.
Nicki Werner
November 29, 2014
Barbara and Ralph you have my heartfelt condolences on the recent passing of your father and father-in-law. You will be in my thoughts and prayers as days go by.
Kristiane Dietz
November 28, 2014
The Dafoe family moved next door to my family on Appleton St. when I was about 10 yrs. old. I remember their girls, Barbara, Nancy and Diane. I was included in their trips to Wautoma and swimming in Silver Lake. Dr. and my dad and brother used to go hunting together. Many happy memories.
Nancy Bierman Rhinehart
November 28, 2014
I grew up in the same neighborhood as the Dafoe's. He was an amazing man! He would always wave and say HI...then continue whistling.
Jill (Gurnee) Lax
November 28, 2014
Dr. Dafoe was a wonderful man, father, husband and physician and loved and respected by all who knew him. He lived on my father's milk delivery route and my dad enjoyed talking with him every now and then. My condolences to his family.
Deborah Collins
November 28, 2014
Condolences to all the Dafoe family. Dr Dafoe was the Cutler family doctor for years. Couple of times he had to stitch me up, plus when I had knee surgery, he had to make sure he was there along with my orthopedic surgeon. He was one of the kindest & most dedicated men I ever met.
Karen Drecktrah
November 28, 2014
Showing 1 - 13 of 13 results