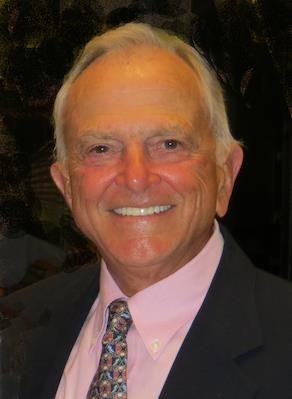 William "Bill" Isaac Merizon, 88 of Sun Valley, ID, died Tuesday October 6, 2020, with his wife by his side in the home they so lovingly built and enjoyed.

Bill was born on August 22, 1932, in Dallas, TX, to Isaac M. and Della L. (Kempf) Merizon. As a young boy, Bill, his younger sister Nancy and his parents moved from Dallas to Albany, NY and Kirkwood, MO before eventually settling in Whitefish Bay, (Milwaukee) WI.

By his own admission, in his younger years, Bill was not a good student (and a bit of a mischief maker!). And so, in 1948, his parents sent him off to The Peddie School in Hightstown, NJ. While at Peddie, Bill excelled in academics and sports, becoming an All-American swimmer. In later years, Bill would say that his time there "changed his life".

Due to his academic and swimming success at Peddie, Bill went on to Williams College, Williamstown, MA. While at Williams he continued with competitive swimming, was a member of the Alpha Delta Phi fraternity and developed many lasting friendships that exist to this day. He graduated in 1956.

As his graduation from Williams approached, Bill and his father made plans to go into business together. Modern Business Machines (MBM) of Appleton, WI began operations on August 1, 1956. However, just days prior to the opening of MBM, Bill was drafted into the U.S. Army. Following two years in The United States Army Counter Intelligence Corps in Germany, Bill returned to Appleton and joined MBM in the fall of 1958.

Bill's father soon retired leaving the business in Bill's capable hands. MBM became one of the largest independent office equipment dealers in Wisconsin. Bill was instrumental in establishing the Business Products Council Association (BPCA) in 1967 and was Chairman of Canon Inc.'s Dealer Advisory Council in the 1980's. Under Bill's leadership, MBM was recognized by the 3M Company as a top Service Award winner for many years, the only dealership in the country to win that award every year it was offered.

As a prominent businessman in the Fox Cities, Bill was a Director of Associated National Bank for over 20 years, retiring from that Board in 1998. In 1976 Bill joined the Board of Directors of Camp Manito-wish YMCA in Boulder Junction, WI, where he served from 1976-1992, including as board president from 1983-1984, and as an Emeritus board member from 2005 until his passing. Bill was instrumental in launching Camp's endowment fund to help preserve it for future generations.

When Bill and Judy later divorced, he began spending more and more time in Sun Valley, ID, a place he fell in love with years earlier. Bill often skied Sun Valley more than 50 days a season and could be found most winter afternoons at the base of Warm Springs greeting passersby. Until his passing, he was an unofficial member of the Sun Valley Visitor's Bureau, as he would tell everyone he met, all over the world, about the magic of his beloved Sun Valley!

In addition to skiing, Bill was passionate about duck hunting each fall with his boys near the northern Wisconsin lake cabin he designed for his family. Over the years, "his boys" grew to not only include sons Fritz and Rick, but also sons-in-law Michael and Paul, grandsons Fritz, Jr. and Beck and various other buddies.

While attending the 75th Anniversary of Camp Manito-wish in 1993, Bill met Martha (Maggio) and a romantic, whirlwind courtship ensued. Martha would always say that meeting Bill was as close as is possible to "love at first sight!" They were married in 1994 and spent the next 26 years building a wonderful life together that included a great deal of time with their precious family, reunions at Williams, and sharing time in Sun Valley with their many dear friends. Bill and Martha's home was always open to any and all guests whether they were coming for a frequent dinner party or skiing for a week.

Bill stayed active in Modern Business Machines until the mid-90's and subsequently sold the business to eldest son Fritz in 1997.

In recent years, once he stopped skiing, Bill and Martha enjoyed spring getaways to the beaches of Sanibel, FL and traveled together to nearly 50 countries. With his cheerful demeanor, huge smile and warm handshake, Bill made new friends wherever he went. He will truly be missed by all who knew him.

Bill's family thanks Dr. Brian Berk, caregiver Tara Bell, the entire staff of Valley Apothecary and the nurses of Hospice & Palliative Care of the Wood River Valley for the kindness and care they provided him.

As conditions permit, a Celebration of Bill's Life will take place in Sun Valley in the summer of 2021.

Should you wish to honor Bill's memory, you may consider a gift to The Della L. Merizon & Isaac M. Merizon Memorial Endowment Fund in support of swimming at The Peddie School, 201 South Main St., Hightstown, NJ 08520 OR Hospice & Palliative Care of The Wood River Valley, P. O. Box 4320, Ketchum, ID 83340.

Friends are invited to share a memory or photo at www.woodriverchapel.com.


Published by Appleton Post-Crescent from Oct. 15 to Oct. 17, 2020.
To plant trees in memory, please visit the Sympathy Store.
MEMORIAL EVENTS
To offer your sympathy during this difficult time, you can now have memorial trees planted in a National Forest in memory of your loved one.
Funeral services provided by:
Wood River Chapel
MAKE A DONATION
MEMORIES & CONDOLENCES
Sponsored by Wood River Chapel.
1 Entry
Bill was definitely a bright light to all who knew him. I count myself as very lucky to have had the opportunity to get to know Bill and Martha. I loved hearing about all of his children, his travels and all of the fun that you two had together!! Condolences to you Martha and to the entire family.
Elise Ann Daniel
Friend
October 26, 2020
Showing 1 - 1 of 1 results