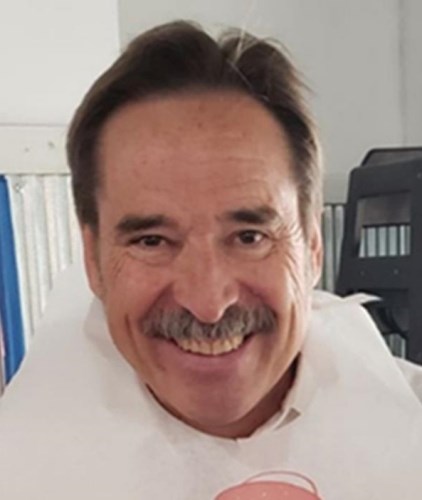 BORN
1951
DIED
2020
If you want to make God laugh, tell him your plans. If you want to make Dan Stahn laugh, tell him that life is fair. When asked how he was, Dan always said "ornery", but was a kind and gentle man who strongly fought to the end. He passed into the arms of his Heavenly Father on December 15, 2020, with the loving embrace of his wife Tana and daughter, Holly.

Dan (Danny) was born December 2, 1951 in Fort Belvoir, Virginia to Chester and Phyllis Stahn. He was the oldest of seven children, Virginia , Rendena , Charles, Evelyn, Robert, and Ernest. They were all influenced by the example of Chester and Phyllis and the family developed a tight bond which remains to this day, not a black sheep in the bunch. He was taught the value of hard work by his "daily five mile walk to school in a blizzard, uphill both ways". As a student, he managed to graduate in the top 28 of his class of 27 students at Grandview High School.

Dan attended Ricks College and BYU and at the age of 21, served a two year LDS mission in Oklahoma. Dan met his wife of 41 years while she was attending Boise State University. She was smitten with his dark construction tan and low bass voice. Tana never saw Dan without his signature "Tom Selleck" mustache. Dan was the oldest of the Stahn men, but the only one that retained his hair. Despite proposing to his bride-to-be at the US Sheep Experiment Station (seriously, this happened), Dan and Tana were sealed for time and eternity at the Idaho Falls Temple on August 24th, 1979. Though Dan longed for enough boys for a football team, their union was blessed with two beautiful cheerleaders, JennieLee (Tim Malewitz) and Holly (Dr. Brock Burkman)

A Virginian by birth, Dan was an Idahoan by upbringing and attitude. He was an avid outdoorsman, a straight-talker, and refused to wear a tie to any event. He was extremely well read and knowledgeable about a wide range of topics for conversation. Dan was truly a jack-of-all trades: farm worker, construction worker, and Sun Valley volunteer fire fighter. He was a model husband, father, and grandfather. As an impeccable dancer and loved to dance with his wife in the kitchen. Dan and Tana spent the first three years of their married life in Sun Valley, Idaho. Then he joined his wife and her family at Chesbro Music Co where he worked for 27 years. They still call "Sun Valley" home spending almost every weekend enjoying the beauty of the area.

Dan and Tana's life was one of togetherness and adventure. They traveled the world often, visiting multiple countries with their family and close Sun Valley friends. Dan was bold with his food choices on foreign travel. He would try anything once, often to the amusement of his wife. They were active members of the Sun Valley LDS ward and shared their love of the outdoors with one another, hiking, skiing, fishing, hunting, and bicycling together.

The couple was proud of their ten grandchildren, two girls and eight boys-now they have their football team. They were ever present in the lives of their grandchildren, often traveling distances to share in important moments such as band concerts, graduations, and sporting events. Their Kansas City grandchildren spent summers in Idaho. Dan would attempt to instill the values of hard work and self-reliance whenever they would listen. Nikolas and Grandpa Dan, his "Gaga" shared a very special bond and have happy memories together.

He is survived by his mother, wife, daughters JennieLee and Holly, son-in-laws Timothy and Brock, siblings, and nine of his grandchildren.

Dan will be missed by many but we take comfort that he is with his father and grandson fishing and trading stories in Heaven.

Private family services will be held. Burial will be in Rose Hill Cemetery in Idaho Falls.

Your thoughts and prayers are enough. The family requests no flowers.

Published by Post Register on Dec. 17, 2020.
To plant trees in memory, please visit our Sympathy Store.
MEMORIAL EVENTS
To offer your sympathy during this difficult time, you can now have memorial trees planted in a National Forest in memory of your loved one.
MAKE A DONATION
MEMORIES & CONDOLENCES
0 Entries
Be the first to post a memory or condolences.