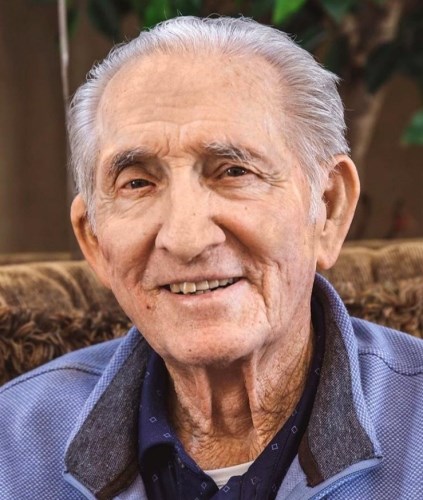 BORN
1921
DIED
2021
FUNERAL HOME
Wood Funeral Home
273 North Ridge Avenue
Idaho Falls, ID
Centenarian George Andrew Browning III passed peacefully at 100.5 years on September 15, 2021, in Idaho Falls, Idaho, where he had lived for the past 30 years. Less than an hour after his passing, his 30th great grandchild was born.

George was born the third of five sons in April of 1921 in Poplar, Idaho, at the home of his mother's doctor.

George was a member of The Church of Jesus Christ of Latter-day Saints.

George's National Guard unit in St. Anthony, Idaho, was called to active duty for WWII, and he served in the U.S. Army in the South Pacific from 1941-1945.

Though he studied pharmacy for five years, George became a successful business owner of SilverWheel Freightlines in Portland, OR. He was a transportation industry leader and served as president of the Oregon Trucking Association, Western Highway Institute, Rotary Club of East Portland, and on the Board of Governors of the American Trucking Association. He was honored to be asked by Governor Vic Atiyeh to be the first commissioner of the Oregon State Lottery system in 1984, since the Governor knew him to be a man of great integrity. George retired from business in 1988, and actively pursued real estate investing for his remaining 33 years. Not only in his career, but in all his activities, he believed everyone deserved to be trusted, challenged all involved with his high expectations, and motivated everyone with his optimism.

George was an avid golfer, a humorist and reformed prankster. When not playing golf he was found watching it on TV and could recount the plays of pro tournaments, the accomplishments of the players, as well as those of his golf companions, Remes, Darrell, and Wayne.

Above all, George valued his family relationships and friendships. He lived a full life. He was happy and optimistic and had a ready smile for all he met. He took great joy in being a generous man, remembered every grandchild's birthday, left sizable tips, and responded to known needs. He was a proud patriot, flying the American flag within his view and falling for every opportunity to donate to a Republican. George will be missed by many for his loving, kind, and appreciative nature. His life and death are proof to all that God is in the details of our lives.

He was preceded in death by his parents, George A Browning II and Christine Bodily Galbraith, his four brothers, Allen, Ben, Clifton and Lowell, his first wife Margene Boothe (1945-1989,) and second wife Clea Hjort Nadauld (1990-2012.)

Contributions to honor his life can be made to philanthropies.churchofjesuschrist.org

Condolences may be offered to the family at www.woodfuneralhome.com