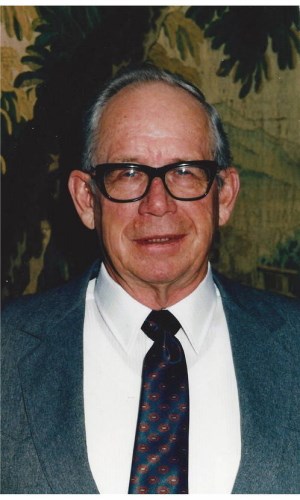 Verne Angus (Gus) McGowan, 90, passed away on May 24, 2017, at Overland Court Assisted Living in Boise, Idaho after battling squamous cell carcinoma for two and a half years. He was born on December, 4, 1926, in Salmon, Idaho to Verne Ambrose and Mildred Margaret Hall McGowan.

Verne grew up in Challis, Idaho, and graduated early from Challis High School Class of 1945 to enlist in the 86th Infantry Division of the Army. Upon discharge in 1947, he returned home and utilized the G.I. Bill to attend the University of Idaho. While on Christmas break in 1948, he met our mother at a New Year's Dance in Ellis, Idaho. They began dating that spring and were married June 4, 1949, and that fall he entered the University Of Oregon Dental School.

The first summer of their marriage was spent in Stanley, Idaho. Dad worked for The United States Forest Service and Mother for Danner's. Their accommodations were a tent.

While in Portland, Oregon, their first son, William Angus, was born. Upon graduating from the University Of Oregon Dental School in 1953, he moved back to Challis to start practicing dentistry. After returning, their second son, Thomas Verne arrived. Adding to the family was their third son, James Arthur, and daughter Augusta Mae followed. Since he wanted to keep busy, he started another office in Mackay, Idaho, to service the residents of Mackay, Arco, and surrounding area. Dad retired from dentistry in 1997 after 40 years.

Gus and Ruby were married June 4, 1949, in Lewiston, Idaho. They were happily married for 67 years. Dad was a founding member of the Lions Club, served on Challis City Council and was Mayor, served as a director/president of Salmon River Electric Board, served on the Armed Forces Draft Board for Idaho, Member of American Legion Post #109, member of the Challis Masons and Eastern Star, as well as a Shriner.

Dad's favorite pastimes were to beat his children at golf and being part of the Ole Geezer league. He truly was partial to being on the course with Everett Allen and Dick Swindell. Dad enjoyed hunting with old buddies (Dick Morton, Dick Swigert, Carl Ziegler and Garth Chivers) and more recently with his sons, son-in-law, grandsons and Lon Blair. With his family and grandkids, he loved to water and snow ski. "A family that plays together, stays together."

Verne was preceded in death by his parents, Verne and Mildred McGowan, sisters Mabel Piva and Janice McCoy and baby son, Bruce.

A graveside service will be held at the Challis Cemetery, June 3, 2017, at 11:00 a.m. with military honors by the American Legion Phillip Kirk Post #109 and the Idaho Honor Guard, burial rites by the Challis Masonic Lodge #92 AF & AM as well as the Florence Chapter #79 Order of Eastern Star.

Family requests memorial donations be made to the organization of your choice.

Published by Post Register from May 27 to May 28, 2017.
To plant trees in memory, please visit the Sympathy Store.
MEMORIAL EVENTS
Jun
3
Graveside service
11:00a.m.
Challis Cemetery
ID
Funeral services provided by:
Jones & Casey Funeral Home - SALMON
MAKE A DONATION
MEMORIES & CONDOLENCES
Sponsored by Jones & Casey Funeral Home - SALMON.
6 Entries
To the McGowan Family, another star has been added and greeted by others, as the sun sets on a life well lived we will always remember the light it left behind remembering one who has a special place in the hearts of so many he touch. Our deepest Sympathy
Robert & Annabel Hall
June 2, 2017
Tom and Becky, saddened to read about your dad. He was great person to have known. Our thoughts are with you at this time. Sincerely Jeff and LaRae
May 29, 2017
Dr. McGowan was our family dentist from the time we came to Arco in 1959 until he retired. He was always so friendly-making our dental appts. something to look forward to! Our sincere sympathy to Ruby and to all of his family. May he rest in Peace.

Fred & Jeanne Simpson
Fred & Jeanne Simpson
May 28, 2017
God speed Doc.. You will certainly be missed. It has been a real pleasure to know you. You were a good Dentist, and a good man. It won't be the same without you around.
Jim Muffett
May 28, 2017
I was so very sorry to hear of your loss. I met your father at a very young age when my front tooth got broken while playing king of the mountain. He was the kindest, most gentle man and to this day I shall never forget that. As a young lady, I had moved to Arizona and worked in a restaurant where he and his lovely wife stopped in to eat. I couldn't have been more delighted to see him after all those years. He will always rest in my heart as a very kind and wonderful man. God rest his soul. Rowena Bingham Barker, Idaho Falls, Idaho
May 28, 2017
Am so sorry for your loss,your dad was a very good soul. My prayers out to all of you
Jenene Moorhead Taylor
May 26, 2017
Showing 1 - 6 of 6 results