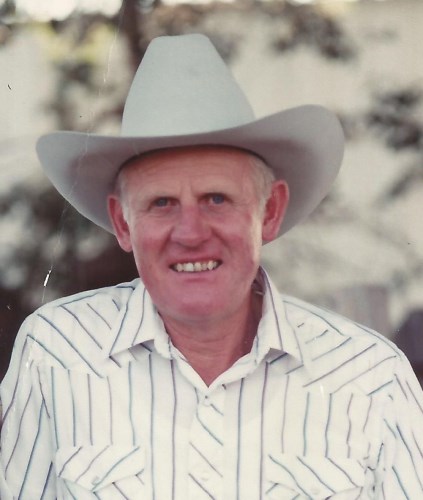 Max was born May 31, 1937 in Preston, Idaho. He was the third of five sons and three daughters born to Shirley and Harriet Swainston Palmer. He was raised on the family dairy farm in Winder, Idaho, where he quickly learned the value of hard work. He was taught at a young age from his father how to handle a team of horses. He continued with this tradition in feeding his own livestock and attending draft horse pulling competitions in various states throughout the rest of his life.

He attended school in Preston, Idaho and graduated from Preston High School in 1955. Max married his high school sweetheart, Ranee "Kate" Knudsen, on November 18, 1955 in the Logan Utah Temple of the Church of Jesus Christ of Latter-day Saints. They were blessed with seven children: Kem, Rick, Chuck "Cliff," Jodee, Zane, Trudee, and Sonny. They celebrated 65 years of marriage last fall and were a great team raising the family and keeping their family business going.

Max and Kate moved their small family to Rexburg, Idaho in 1959 to start a new job for Slim Whittle at the Rexburg Livestock Auction. He later bought into the auction and developed his own style of self-taught auctioneering. After leaving the work of his dad's dairy, Max was determined not to milk another cow and started on a lifetime of horse trading, raising beef cows, and farming outside of Sugar City. In 1961 he moved his family to Dillon, Montana to help his father and brothers run a hay and cattle ranch. That didn't work out, so they returned to Sugar City and he continued his horse trading. He worked and traveled with Bish Jenkins as he learned the ropes of horse trading. He was known as being an honest and trustworthy dealer. After losing their home in the Teton Dam flood, he bought a larger farm across the road from their previous home and built up a nice set of corrals and a rodeo arena. The arena proved to be a good training ground for their children, their friends, and then their grandchildren to develop their rodeo and riding skills. With the help of his sons, he was able to enlarge the farm and ranch and expand into livestock trucking. Max started selling WW trailers with Bob Huskinson, and later became the first dealer for Trails West Trailers made in Preston. He received the Top Ten Dealer award for sales in 2000 and 2003.

Max enjoyed riding and training horses and taught himself how to rope. He had an eye for a good horse and was the calf roping champion in 1961 in the Montana Rodeo Association. In 1966 his love of rodeoing grew as he became a pick-up man first for Curley Angell, and then Max Hoggan. When Hoggan passed away he continued to work with the Hoggan Brothers Rodeo Company. He carried on with this passion for 29 years and was chosen by the cowboys to be the pick-up man at the Eastern Idaho Rodeo Finals every year until he retired. He was one of the best around and rode exceptional horses. Max served on the board of directors of the Madison County Fairgrounds and Eastern Idaho Association for many years. He was Soil and Water Conservationist Farmer of the Year in 1988 and Fremont and Madison Cattleman of the Year in 1997. He was nominated into the Idaho Horseman Hall of Fame in 2003 and was respected by all those who knew him.

Max was an active member of The Church of Jesus Christ of Latter-day Saints. He served in the bishopric during the trying times after the Teton Dam collapsed in 1976. He also served in many other callings through the years and remained faithful throughout his life.

Max was a hard worker and taught his children to do the same. The only vacations he took were always related to a rodeo, a horse pull, or to buy some livestock. Many of his grandchildren took up rodeoing and he enjoyed traveling to watch them. He would also support his grandchildren in their various sporting events and activities as they pursued different interests.

Max was preceded in death by his parents, Shirley and Harriet Palmer, and their granddaughter, Kelsie Palmer Munns.

The family wishes to express their gratitude to Ambrea Wright from Aspen Health Care, who skillfully and compassionately assisted Max in his declining last weeks. We were able to fulfill his wishes to stay at home and be taken care of by many hours of help from his family.

Due to COVID concerns, masks are encouraged.

A link for the live stream will be posted at www.flammfh.com the day of services.
To plant trees in memory, please visit our Sympathy Store.
Published by Post Register on Apr. 22, 2021.
MEMORIAL EVENTS
Apr
25
Visitation
5:00p.m. - 7:00p.m.
Flamm Funeral Home
61 North 1st East, Rexburg, Idaho 83440
Apr
26
Visitation
9:30a.m. - 10:45a.m.
Flamm Funeral Home
61 North 1st East, Rexburg, Idaho 83440
Apr
26
Funeral service
11:00a.m.
Flamm Funeral Home
61 North 1st East, Rexburg, Idaho 83440
Funeral services provided by:
Flamm Funeral Home - Rexburg
MAKE A DONATION
Please consider a donation as requested by the family.
MEMORIES & CONDOLENCES
Sponsored by Flamm Funeral Home - Rexburg.
6 Entries
One of the great mentors of my teenage years. Max had a way that will never be bested. Treated me like gold. My thoughts and prayers go out to all his many, many, friends and family today.... God Bless Max!
Kurt Hibbert
April 26, 2021
I am so sorry for your loss. I met Max years ago when I was working for Henderson Wheel in Ogden , Utah. Max would come to Ogden for the horse auction and to buy trailer parts for the trailers he sold. Max and I would talk for forever when he came in. I haven´t seen Max since probably 2014. At that time Henderson´s had got bought by NAPA Auto Parts so we no longer sold trailer parts. It´s weird because I had been thinking about Max off and on for the last few weeks. Sunday night I was looking on google maps and decided to look at Sugar City and try to see where Max´s place was. When I searched his name the obituary popped up. I was truly shocked. Max was a great man and will be greatly missed.
Brad Weathers
April 25, 2021
Heaven has received a very good man. Prayers go with his family though this difficult times. RIP
Dallas & Charlotte Orchard
April 25, 2021
Our prayers are with Max's family that they might find peace. I enjoyed working with Max at the Cache Valley Livestock Auction and trading horses RIP my friend.
SCOTT C MITTON
April 25, 2021
I will always remember Mr. Palmer as the best rodeo pick-up man and the way he rode his beautiful palamino horse in the rodeos.
Cathy Koon
April 23, 2021
Max was the best uncle you could have. Max would always welcome the "city slickers" with a ride on the most gentle horse he had..but I always wondered why it took three people to saddle it ? Later when I got married Max and Kate offered to let our family use their cabin on the Targhee ..my wife loved to fish so we had a great time..when we pulled up to their ranch he always asked if I had a rifle because of the bears..I always did but never had to use it. Uncle Max will always be missed but thank you for all your hospitality Max and Kate and cousins. Our condolences. Joey and Brenda Shaffer
Joey Shaffer
April 22, 2021