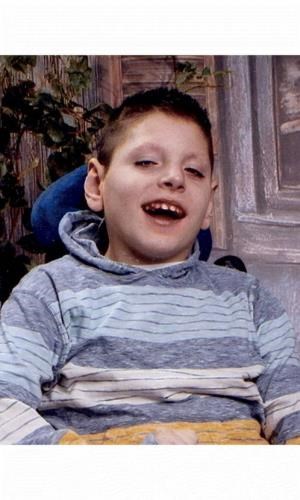 Teegan was born July 3, 2002, in Idaho Falls, Idaho, to Aubrey Ashley, Mark Sakaguchi and Chris Waid. Teegan attended schools in Idaho Falls, and he was currently attending Eagle Rock Junior High. During Teegan's lifelong battle with his PA disorder, he always had a sparkle in his eyes and a big contagious smile. He loved going to school with his friends, spending time with his family and friends, watching his loyal SpongeBob, taking car rides with the wind in his face, rocking out to music, balloons and cheering on his favorite team, The Celtics.

In Teegan's 14 years, he touched many hearts and lives. He leaves us with a legacy for eternity.

He was preceded in death by his great-grandparents, Keith Raymond Ashley, Joy Ponsello, Sam and Martha Sakaguchi, and Bill and Jean Klein, and his great-uncle, Rob Ashley.

Memorial services will be held at 11 a.m. Saturday, May 6, at Wood Funeral Home, 273 N. Ridge Ave. The family will visit with friends on Saturday from 10 a.m. to 10:45 a.m. prior to services at the funeral home. Condolences may be sent to the family online at www.woodfuneralhome.com.