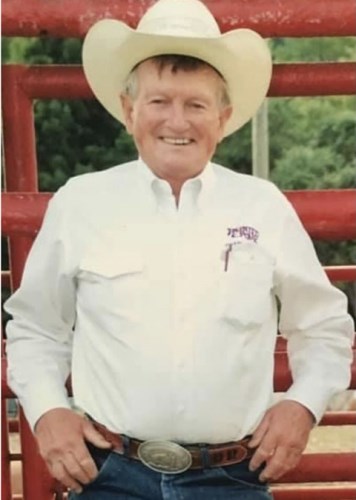 Dave served his country in the United States Army for two years, 1953 to 1955 with an honorable discharge. He had fond memories of his military days and often shared stories with his kids.

Dave had a long and successful career at the Sandy Hill Corporation, where he worked for 44 1/2 years as a Workflow Coordinator in the machine shop. His good attitude and work ethic helped him thrive for well over four decades with the same company. He enjoyed his work and the people he worked with.

Dave was dedicated to his family his entire life, always supportive, encouraging, and willing to help. You could always count on his big smile, good nature and positive energy. He traveled the country competing in Professional Rodeos and always wanted it to be a family experience, so the entire family would go. A truck, camper, trailer, horses, dogs, kids, everyone went on these excursions making incredible memories over the years. Some of the rodeos included Madison Square Garden, Kissimmee FL, Jackson MS, Baton Rouge LA, Houston TX, Fort Worth TX, St. Tite, Quebec, Cheyenne Frontier Days Rodeo and the All American Quarter Horse Congress in Columbus, OH, as well as the local rodeos in the Northeast.

Dave was a cowboy at heart, a gold card lifetime member of the Professional Rodeo Cowboys Association and the American Professional Cowboys Association. He was also the year end Champion Tie Down Roper many times at both the Painted Pony Rodeo and the 1000 Acres Ranch back in the 1960s and the 1970s. He competed in professional rodeo for over 50 years. Dave took a lot of pride in his horses over the years and had many exceptional rope horses including his latest horse Cricket, who is still in the family barn and was his pride and joy.

Dave had many special friends that he stayed in touch with by phone. Jack McCue, Joe Haydock, the late Howard Council and Billy Don Hogg, who are both world class saddle makers, and too many more to list. He loved to chat on the phone weekly about rodeo, saddles and horses. He had a real appreciation for the quality and workmanship of their saddles and he ordered one of each to use while he competed and treasured both saddles.

In the end, Dave did everything he wanted to do, did it his way and had no regrets. He often said if he could do it all over again, he would not change a thing, he considered himself a lucky man to live the life he lived. He was often referred to as a mentor and a role model to so many. He was widely regarded as an all-around good guy.

Dave enjoyed his grandchildren immensely. They all have fond memories of their grandfather from over the years as they were all close with him. The holidays were always a family gathering at Grandma and Grandpa's for a nice meal and time together, stories, fun and laughter.

Due to Covid-19, there will be a private service for the family. A graveside service and burial open to family and friends will be held at Union Cemetery in the town of Fort Edward, in the spring, on a date to be announced.

Arrangements are under the direction of Carleton Funeral Home, Inc., 68 Main St., in Hudson Falls.

Online condolences may be made by visiting www.carletonfuneralhome.net.

Published by Post-Star on Feb. 28, 2021.
To plant trees in memory, please visit the Sympathy Store.
MEMORIAL EVENTS
To offer your sympathy during this difficult time, you can now have memorial trees planted in a National Forest in memory of your loved one.
Funeral services provided by:
Carleton Funeral Home
MAKE A DONATION
Please consider a donation as requested by the family.
MEMORIES & CONDOLENCES
Sponsored by Carleton Funeral Home.
10 Entries
So sorry to hear of your loss, your dad was a very nice man, I will always remember him walking all the time . He was a remarkable horseman / rodeo enthusiast ! He will be remembered foldly, esp. for the love and devotion to his family !
Wendy EvansBacon
March 13, 2021
We lived on Vaughn Road for more than forty years, across from Dave´s horse pasture. For many years early December would find our family at Reynold´s Christmas tree lot. What should have been a quick trip to pick out a tree usually ended up in long interesting conversations with Dave (in the cold) about his family, rodeos, and life. Our "Christmas talks" are still a part of our Christmas memories that even our kids remember today.
Jim and Carol Steele
March 1, 2021
Our deepest condolences to the Reynolds family. Mr. Reynolds was one of a kind and will be sorely missed. Thoughts and prayers to all.
Dori Perren and Jeff LaFountain
March 1, 2021
I remember Dave from working with him at Sandy Hill and from living in Hudson Falls as a youth both myself and my Dad and Grandfather worked with Dave. Sorry sorry for your loss.
Robert Nailor
March 1, 2021
Will miss you Dave....enjoyed our visits.....you and the family are special....
Russ and Sandie Allen
February 28, 2021
Our deepest sympathy to the Reynolds family your father was an amazing man always enjoyed talking to him . RIP Mr. Reynolds
Stephanie Doyle
February 28, 2021
So very sorry to hear of Mr. Reynolds passing. He was a wonderful neighbor. May he rest in peace.... The Mumblo family.
Pauline Cornell
February 28, 2021
To the family of Mr. Reynolds. I am so sorry for your lost. I am honored to have known your father. He would always bring a smile to my heart when he walked into Stewart´s for his coffee. We had many good talks about anything that came to mind. Especially about horses and rodeos. Mr. Reynolds you truly were one of the great ones. Rest In Peace. Margaret
Margaret Pinkowski
February 28, 2021
My sympathies and prayers for the Reynolds Family. I only new Dave from afar, but knew so many who respected him. Theresa and I worked together for several years and I am terribly sorry for your Dad's passing. Please extend my sympathies to your Mom , sister and brothers. Keith
Richard Keith Locke
February 28, 2021
Sorry for your loss. Sending prayers
Bill and Cathy Ellis
February 28, 2021
Showing 1 - 10 of 10 results