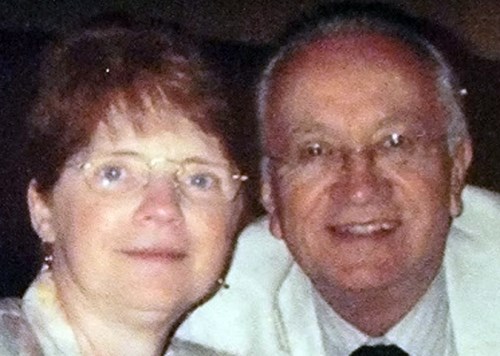 SOUTH GLENS FALLS - Douglas J. Murphy, 82, of South Glens Falls, passed away peacefully at home in the early morning hours on Saturday, June 5, 2021 surrounded by his loving family. Born on November 2, 1938, in Ft. Edward, NY. He was the son of the late Bernard and Elizabeth (Owens) Murphy.

Doug attended Minerva Central High School, graduating third in his class in 1957. Doug's Tour in the United States Navy from 1959 to 1963 was spent aboard the USS Pocono, out of Norfolk, VA. Doug met the love of his life, Cynthia Laney on a blind date and the couple were married on September 3, 1966. They resided in South Glens Falls for the past 53 years.

Doug worked as a heavy equipment operator for Local 106, Operating Engineers. After his retirement in 1993 he helped his wife with her cake business, taking on the role of "Chief Frosting Maker". Anyone who knew Doug, knew he had a green thumb as he enjoyed spending many hours working in his flower gardens. Along with his gardening he had a great love of the Praying Mantis. For many years he would breed them, store their eggs until the spring when they would hatch and he would sprinkle them throughout his garden. He spent many hours watching them grow and live amongst his flowers.

Doug and Cindy enjoyed traveling out West, taking many trips to Albuquerque, NM, Farmington, NM, Santa Fe, NM, Sedona, AZ, Durango, CO, Las Vegas, NV and the Grand Canyon. Doug had a great fondness of Mickey Mouse and especially liked going to Disney. Most nights you would find him in his favorite recliner eating his favorite snack, a big bowl of popcorn that was cooked on the stove in a kettle, drizzled with extra virgin olive oil and salt, all while watching a "Good Western" or a NY Yankees game. He was an avid NY Yankees fan. Anyone who stopped to visit Doug would hear a couple of sayings as you parted ways, "Watch the Post", he had a big steel post at the end of his driveway so that anyone pulling in and out of his driveway would stop running over his flowers that he worked so hard on. "Say Hello to all of my friends in (where ever you were from)" and he would try to say it before you said to him, "Say Hello to all my friends in Glens Falls", it was almost a little game, who could say it faster. "Keep the Faith Kid" was another that he often said to each one of us as we departed from our visit. Anytime he wanted Cindy to cook something he hadn't had in a while he would say, "Ohhh, I haven't had that in a 100 years", with a Big Smile on his face. He had a sarcastic quick wit about him that would leave you smiling every time you were in his presence.

He was very proud of being a member of AA for the past 28 years. He was a sponsor for many members and was very proud of their accomplishments. Doug made lifelong bonds and friendships as he was a member of Crotched Pond Hunting Club in Indian Lake, NY, where he spent many years hunting and fishing with his son, Matthew.

Besides his parents, he was predeceased by his brother Donald Murphy. Doug is survived by his wife of 53 years and their four children: Elizabeth (Michael) Laper of NM, Kathleen Fontaine of Altamont, NY, Matthew (Pam) Murphy of South Glens Falls and Margaret (Mickey) Orta of Queensbury; his grandchildren: Payton and Cellinn Fontaine, Nicolas, Madelyn and Sophia Orta and Fredilyn Murphy. He is also survived by a sister-in-law, Francis Murphy; and many nieces, nephews and cousins.

The family wishes to thank Dr. Yun, Dr. Taylor and their staff at the Charles R. Wood Cancer Center for their kindness and compassion given to Doug during his short illness.