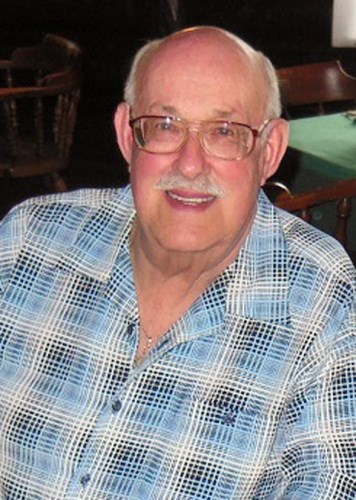 Howard graduated from Glens Falls High School in 1953, part of the first class to graduate from the new high school on Sherman Ave. A renowned math wiz, a copy of his perfect Algebra regents test was placed in the building's cornerstone.

Howard attended Union College as an economics and engineering major before joining the US Army in 1955. He served most of his time as a finance clerk in Saumur, France. He joined the Army Reserves following active duty and stayed for 31 years, attaining the rank of Command Sergeant Major and earning several awards including the Army Commendation Medal.

In 1963, Howard married Ruth Forbes, his high school sweetheart. They had dated throughout their high school years where they both sang together in church and select choirs. The depth of his love for Ruth was legendary, and was foretold in the inscription he left in her high school yearbook 10 years earlier: "Wishing the best life has to offer to the woman I am going to marry". Howard and Ruth enjoyed 58 years of marriage, raising three children, enjoying fine dining, and supporting the local arts with memberships to the Sembrich Museum, SPAC, and the Adirondack Theater Festival.

Howard was employed for many years as an electrical contractor for Liberty Electric in Schenectady before returning to Glens Falls and working for Hill Electric and then Ontario Electric as an office manager. He ended his working career at the age of 82 as a warehouse receiver for Warren Electric.

A lifelong member of the First Presbyterian Church of Glens Falls, Howard served several terms on the Board of Deacons, quickly gaining fame for his blueberry pancakes and homemade whipped cream at the annual Deacon's breakfast where you could always find him smiling in the kitchen wearing his chef's hat. He also served as an Elder on Session working with the Mission Committee. He was especially proud of becoming a Stephen Minister, where he was able to provide one-on-one care and support to those going through a difficult time.

Howard will be remembered for his calm demeanor, his willingness to help in any situation, and his steadfast devotion to his wife and children.

Services will be private and held at the convenience of the family.

Memorial donations may be made to the Mission Committee of the First Presbyterian Church of Glens Falls.

Arrangements are under the care of the Singleton Sullivan Potter Funeral Home, 407 Bay Road, Queensbury and those who wish may make online condolences at sbfuneralhome.com

To plant trees in memory, please visit our Sympathy Store.
Published by Post-Star on May 11, 2021.
MEMORIAL EVENTS
No memorial events are currently scheduled.
To offer your sympathy during this difficult time, you can now have memorial trees planted in a National Forest in memory of your loved one.
Funeral services provided by:
Singleton Sullivan Potter Funeral Home
MEMORIES & CONDOLENCES
Sponsored by Singleton Sullivan Potter Funeral Home.
2 Entries
Denise,I am So so sorry to see the passing of your dad.Its hard loosing parents. He was a special guy and I am sure he will be missed by many
Donna phaneuf
May 11, 2021
Remember Howard as one the first kids to hit the softball over the centerfield fence at Sanford Street School !!!Great friend who I had many good times with growing up !!! Condolences to Ruth and family !!!
Jim Yarter
May 11, 2021