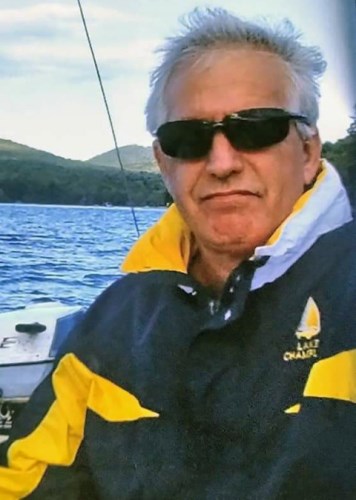 QUEENSBURY - Robert Joseph Monroe, 71, a resident of West Mountain Road, passed away at Glens Falls Hospital on Sunday, January 17, 2021, from complications stemming from Covid-19. His beloved wife Linda was at his side to ease his passing. Born on March 2, 1949, Bob was the son of the late Gloria (Collier) Monroe and Richard Monroe.

After numerous childhood adventures in nearby fields and woods, and even more scrapes and bruises, scars and visits to the emergency room, Bob graduated from Queensbury High School in 1968 and joined the Army. He served in Vietnam, maintaining and repairing helicopters at a base outside Saigon.

Upon attaining his honorable discharge from the Army Bob began his adult career working in local garages as he began a path to betterment, working toward a Bachelor's Degree in Education, and later his Master's, both at SUNY Albany. He began his new career teaching automotive mechanics at WHWSE BOCES, later switching to carpentry. Frankly, the more computerized cars became, the less Bob enjoyed the tinkering! After retiring as a teacher, he began a related career as a general contractor and home inspector until his final retirement about ten years ago when rheumatoid arthritis began to take its toll on his body.

In 1983 Bob met Linda Goodale and married her in 1986, forging a new family with three of his children and two of hers. It made for a full house there in South Glens Falls. Bob found in Linda a perfect union of souls that made them as one. They were each other's rock and salvation. Most of all, Bob was a gentle, loving man, devoted to his wife and extended family. Fun times abounded on Lake George, first with a sailboat and later with a power boat. No having to wait for breezes that way! He delighted in the effort necessary to make their house into a true home and refuge, turning a screened back porch into an inviting sunroom and creating a masterpiece of a kitchen to delight his wife. But highest on his list of favorite pastimes was baby-sitting his adored grandchildren who adored him back in equal measure. Pool-time was fun time with Bob splashing away beside them. Bob loved to travel around the country and had just begun to enjoy their new Myrtle Beach condo. He also liked watching various programs on the History Channel and National Geographic.

Bob was predeceased by his parents, uncles Fred, Harold, and Edward Monroe, his aunt, Doris Greeno, and his niece, Laurie Monroe. He is survived by his wife, Linda; dear brother Gary Monroe of FL; and his children: Tammy Monroe, Kerry Watkins, Robert Monroe II, Jessica Donovan and James Donovan of CA. Also his grandchildren: Zane and Sage Grasso-Monroe, Hailey Diaz, Helen Watkins, Ella Morrill, and Daisy Donovan; as well as two nephews and several cousins; including his special one, Gayle Greeno. His cat Crackers will also miss him greatly.

Due to the pandemic there will be no funeral services at this time. A celebration of Bob's life will be held in June and the date announced at a later time. Condolences may be sent to Regan Denny Stafford at [email protected] In lieu of flowers, remembrances of Bob's life may be sent to St. Jude Children's Research Hospital, PO Box 50, Memphis, TN 38101 or Doctors Without Borders, PO Box 5022, Hagerstown, MD 21741, or to a charity of one's choice.

The family would also like to sincerely thank the doctors and nurses, aides and technicians in the ICU at Glens Falls Hospital who have worked ceaselessly to keep the coronavirus at bay. Please make their jobs easier-wear your mask!

For those who wish, on line condolences may be made to the family by visiting www.sbfuneralhome.com.

Arrangements are under the direction of the Regan Denny Stafford Funeral Home, 53 Quaker Rd, Queensbury, NY.

To plant trees in memory, please visit our Sympathy Store.
Published by Post-Star on Jan. 22, 2021.
MEMORIAL EVENTS
No memorial events are currently scheduled.
To offer your sympathy during this difficult time, you can now have memorial trees planted in a National Forest in memory of your loved one.
Funeral services provided by:
Regan Denny Stafford Funeral Home
MAKE A DONATION
Please consider a donation as requested by the family.
MEMORIES & CONDOLENCES
Sponsored by Regan Denny Stafford Funeral Home.
5 Entries
I had the privilege of teaching math in Bob´s construction trades class at BOCES. He was a great advocate for the students, often sitting in the middle of the class and asking questions he felt they should be asking and acting like a student himself. I often used his questions as an example to other students, I too learned from him. I am sorry for your loss and will miss him too.
Jim Blakely
January 24, 2021
So sorry to hear of Bobs passing, prayers for you Linda and your family.
Andrea & Russell Stephenson
January 22, 2021
so sorry to hear this Linda, God bless you....
Patty Maurer
January 22, 2021
I´m amazed at your strength. Always have been. Our hearts are hurting for you all. What a sweet gentleman Bob was. We are always here. Love you Gail and Pete
Gail and Pete
January 22, 2021
Prayers Linda, Heaven gained a new angel, we love you
Marie Catone
January 22, 2021
Showing 1 - 5 of 5 results