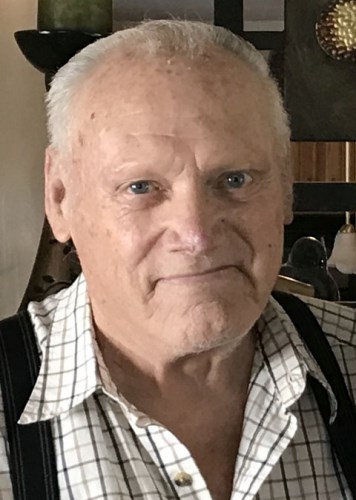 Born on May 26, 1942 at Glens Falls Hospital, he was the son of the late Irving LeRoy and Gail (Clark) Brown.

He was a graduate of Hudson Falls High School.

At the age of six, Tom accepted the Lord Jesus as his personal savior and has actively served and worked for Him all his life. His favorite scriptures have been John 3:16 and Matthew 5:16.

In June of 1962, Tom married Eva Keech. The couple built their home on Notre Dame Street.

Tom got his first job at the age of 12 delivering papers. He then worked at the Homestead Motel on Route 4. Finally, he held the position of shift supervisor for many years at Scott Paper (Irving Tissue) for 40 years before retiring.

As a teenager, Tom was on the track team and active in the FFA and Gospel Lighthouse Church. Being on a farm, he had raised chickens, calves and pigs and also showed the cows at the Washington County Fair. Tom had always enjoyed the outdoors especially activities such as hunting, fishing and trapping. He had built five complete houses and many smaller building/construction projects. He had many hobbies such as working on old cars, boating and skiing on Lake George, and swimming with his buddies at Red Bridge on the Feeder Canal – all while being involved in many church functions and activities.

Tom was a loving husband and caring father of four children. He loved spending time with his family in the summer, boating and water skiing on Lake George and winters were spent snowmobiling the trails in the Adirondacks. Tom enjoyed being an active part of his family's life.

In the late 1980's, he started farming with the purchase of six Herefords, took over his father-in-law's farm on West River Road and increased the herd to 50. In 2005, he built a home on the farm where he and his wife presently live. In 2002, he began traveling after purchasing a Fifth Wheel camper.

As an adult, he continued to be very active in all church functions as well as serving as deacon/council member. Presently, he is a member of the Calvary Family Life Center of Glens Falls. Beyond all the busyness of life, his daily goal was to be a witness of the love of Jesus Christ to everyone he encountered.

In addition to his parents, he was predeceased by his siblings, Winifred Hodges, Robert Brown and Linda Brown.

Memorial services will follow the calling hour at 11 a.m. at the church.

Arrangements have been entrusted to the Carleton Funeral Home, Inc., 68 Main Street in Hudson Falls.

Online condolences may be left by visiting www.carletonfuneralhome.net.

Published by Post-Star on Jul. 24, 2021.
To plant trees in memory, please visit the Sympathy Store.
MEMORIAL EVENTS
Jul
28
Calling hours
10:00a.m. - 11:00a.m.
Calvary Family Life Center
100 Sherman Ave., Glens Falls, NY
Jul
28
Memorial service
11:00a.m.
Calvary Family Life Center
100 Sherman Ave., Glens Falls, NY
Funeral services provided by:
Carleton Funeral Home
MAKE A DONATION
MEMORIES & CONDOLENCES
Sponsored by Carleton Funeral Home.
6 Entries
Eva, our deepest condolences to you and your family at this very sad time. Tom was a truly wonderful and loving man. We are deeply saddened by his passing. Love to all.
Marybeth, Bill and Mary Ellen
Family
August 3, 2021
Eva Our sincerest condolences for your loss. We we I'll miss Tom. We are rejoicing that he no longer is suffering and in pain. We pray peace as nd love for you. May God Bless you always.
Dawn & Randy Sumner
July 27, 2021
Praying for you during this time. Every pastor would want 100+ men like Bro. Tom Brown. Tom was a solid well-balanced Christian.
Pastor & Mrs. Don Kiper
Friend
July 25, 2021
What a loss of a gentle caring man. My thoughts and prayers are with you at this time. You had a loving great life together. May the happy memories be your thoughts in the future. Jackie Andrejkovics
Jackie Andrejkovics
Friend
July 24, 2021
My thoughts and prayers are with you and all of family
Louise Barney terpening
July 24, 2021
Eva we are so sorry for your loss. Tom was a good man. We will keep him in our hearts always.
Jim and Diane Ball
Friend
July 24, 2021
Showing 1 - 6 of 6 results