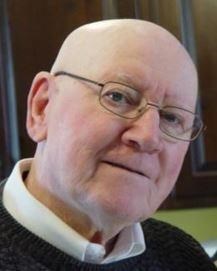 BORN
1922
DIED
2021
FUNERAL HOME
Campbell-Ennis-Klotzbach Funeral Home
610 South Main Street
Phoenixville, PA
Edward R. Szegedy, age 99, husband of the late Mary Ann “Molly” (Caffrey) Szegedy, of Phoenixville, PA, passed away on Tuesday, September 21, 2021 at home. Born on February 4, 1922 in Phoenixville, PA, he was a son of the late Julius R. and Irene M. (Cooper) Szegedy. Mr. Szegedy was a graduate of Phoenixville High School and the West Chester Teacher’s College. He owned Buttonwood Press, a form sales company, for 21 years. Mr. Szegedy honorably served in the United States Navy during World War II. He also served on Phoenixville Borough council for 4 years, and was a member of the Phoenixville Planning Commission for 10 years. He was a Committeeman and Treasurer for the Republican Party for 25 years, and he was a member of the Historical Society of the Phoenixville Area and the American Legion Post 482 in Phoenixville. Mr. Szegedy is survived by two children, Jean Szegedy, wife of David Pflieger of Phoenixville, PA and Robert Szegedy of Phoenixville, PA; four grandchildren and one great-grandson.  Services will be held privately. In lieu of flowers, memorial contributions may be made in his name to the Historical Society of the Phoenixville Area, 204 Church Street, Phoenixville, PA 19460. Condolences may be made by visiting www.PhoenixvilleFuneralHome.com. Arrangements are being handled by the Campbell - Ennis - Klotzbach Funeral Home, Inc., Phoenixville, PA.
Published by The Mercury from Sep. 22 to Sep. 23, 2021.
To plant trees in memory, please visit the Sympathy Store.
MEMORIAL EVENTS
To offer your sympathy during this difficult time, you can now have memorial trees planted in a National Forest in memory of your loved one.
Funeral services provided by:
Campbell-Ennis-Klotzbach Funeral Home
MAKE A DONATION
MEMORIES & CONDOLENCES
Sponsored by Pottsmerc.com.
0 Entries
Be the first to post a memory or condolences.