He was born in the Bronx, a son of Anne Mulligan and the late John J. Lynch. Drue moved to West Shokan and attended Onteora High School.

He then transfered and graduated from John A. Coleman High School in 1982. Drue received a B.A. in Business from St. Bonaventure.

In 1986 Drue began his career at the Ulster County Sheriff's Office, Corrections Division. He later moved to the Criminal Division and was promoted to Detective Sergeant in 2007. Over the years Drue supervised the Internet Crimes Against Children unit, formerly served as President of the P.B.A. and worked on the Navigation unit and Mid-Hudson Regional Drug Task Force.

He married Jeanmarie Donaghy on September 4, 2010.

Loving husband of Jeanmarie Lynch, loving father of Dylan Lynch at home and step father of Jake and Raya Sweed both at home, son of Anne Mulligan and her husband Robert of Apache Junction, AZ, stepson of Kathryn Lynch of Stuart, FL, grandson of Helen Lynch of Albany, brother of Sean Lynch and his wife Wendy of Medway, MA; nephew of Edmund Lynch of CO. Many nieces and nephews also survive.

Memorial contributions may be made to a charity of your choice. Online condolences may be sent to the Lynch family by visiting www.SimpsonGaus.com.

Published by Poughkeepsie Journal on Apr. 5, 2011.
To plant trees in memory, please visit the Sympathy Store.
MEMORIAL EVENTS
To offer your sympathy during this difficult time, you can now have memorial trees planted in a National Forest in memory of your loved one.
MAKE A DONATION
MEMORIES & CONDOLENCES
47 Entries
Drue was a very good friend of mine. We go back many of years. Drue and I would fly together in my aircraft. Miss him a lot. Maybe some day we will meet again.
Bud Rose
Friend
March 30, 2021
He was my buddy, very good friend and also my co-pilot.
Bud Rose
Friend
March 30, 2020
I still can't belive your gone. Your children, wife and family are in my prayers. May our loving Father comfort them.
April 28, 2011
I am sure going to miss you,,had no idea about this but my thoughts are prayers are with the family and the wife of Drue,,he was a great person to know and a great person to just let loose and have fun with,,you will be forever in my heart,R.I.P My Dear Friend.
Sherrie Sadowski
April 26, 2011
There are no words to say we are all still in shock and we will miss you so very much. We will make sure Dylan knows what a wonderful loving father he had and he will know that you will be looking over him always.
Vickie
April 14, 2011
Be at peace, Drue. It doesn't make sense to take you so early in your life, yet we must trust Him to know why. You have touched so many in your life. Be free.
Peggy Krolak Barish
April 13, 2011
Rest now my Friend
Dave Warringer 56S
April 8, 2011
Drue. The many yrs. we spent together as kids, and adults has made us remember all the good times we had... Many of them.... MY heart feels empty, but you were so good to all people that you knew... All of us have a emptiness in our hearts, You will NEVER be forgotten. The whole Family will miss you! We will be together again! Love you like a brother. Our hearts goes out to you and your family.
The Garnsey's/Tom Puccini
April 7, 2011
Dear Jeanmarie and Family,
I'm very sad to learn of Drue's death. He was a kind caring person who always made you feel welcome. His memories will last in our hearts for years to come.
Bonnie Benjamin Clancy Rockledge Fl
Bonnie Benjamin-Clancy
April 7, 2011
Drue, you have no idea how much of an important impact you made on many lives. I,personally, want to thank you for all the times you were there for me in the past few years. You will truly be missed. May God hold you in the palm of his hand until we meet again. Deep sympathy to your loving family
Susan Kessler
April 7, 2011 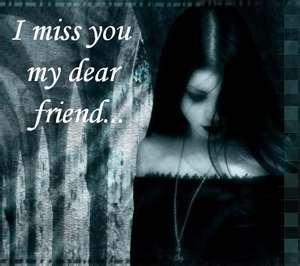 April 7, 2011
An angel to all who knew you, athough we were't ready to let you go, now you are our angel who watches over us all even more. forever missed
April 7, 2011
Kathy Brasen
April 7, 2011
You were a wonderful fun loving kid who grew to be a wonderful mature adult who served his community with honor. You will be missed by many.
Mike & Donna Patrick, Parker, Colorado
April 7, 2011
Drue, I will miss you terribly my friend. You were always there protecting me in very horrible situations in the past few years. A valiant adversary in the fight against Domestic Violence. May God hold you in the palm of his hand until we meet again. Great sadness.
Susan I. Kessler
April 7, 2011
Jeanmarie, I am so sorry for your loss. You and your family are in my prayers, if you need anything at all just call, for anything-anytime. Drue was one of the best!
Toni Alvarado
April 7, 2011
Drue, I will miss you my friend. Thanks for always having my back and for just being you. Love to your family, may they find strength to get through this terrible time. R.I.P.
Debbie Rauschendorfer
April 7, 2011
RIP Drue Lynch, Ive never met you, but can see your loss has effected many.
Frank Smith
April 7, 2011
Deeply saddened by his passing. Always enjoyed our exchanges of thoughts on life and it's humor. The Brotherhood of Law Enforcement has lost another unsung
hero.
ID "Dan" Mark
April 6, 2011
May God hold you in the palm of his hands
Aunt Pat & Uncle Edmund
Edmund Lynch
April 6, 2011
hey buddy rip everyone never had a bad thing to say about you. you will be missed.I feel very hollow.We will see each other again.You are true.Love ya always.
Gordon Haaland
April 6, 2011
Truly sorry for your loss. Leo Maneri and the Maintenance staff at the Ulster Count Law Enforcement Center.
April 6, 2011
Our prayers go out to your family Drue. You will not be forgotten and you will be extremely missed. Peace Good Buddy. (The Fowler Advocacy)
Paul Fowler
April 6, 2011
Rest in Peace Drue
Christina Scully
April 6, 2011
THANK YOU FOR YOUR SERVICE!
Sean McCulloch
April 6, 2011
Our thoughts & prayers are with you during this difficult time.
From all of us @ Enzo's
April 6, 2011
ann sapp riddick
April 6, 2011
Drue you will be missed by my family and I. We will meet again in Heaven. My reguards to Jeanmarie and family.
Dean Cousins
April 6, 2011
Very sorry to hear about the passing of a dear former elementary school classmate-- my sympathies to the family...
Deanne Braun
April 6, 2011
You will always be remembered. Your little friend from Shokan NY