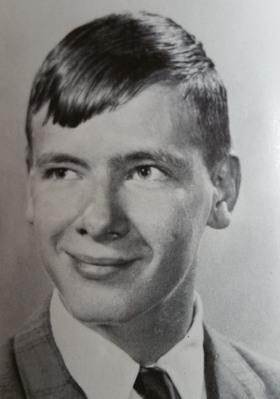 James was born September 21, 1952 in Rhinebeck the son of the late George Melley, Sr and Ellen (Funk) Melley

Jimmy, a member of the Honor Society in his senior year (1970) at Red Hook High School. While growing up adjacent to the Red Hook Golf Club, Jimmy became an avid golfer and played on the Red Hook High School Golf team, for three years running, from 1968 to 1970. After high school, Jimmy attended Marist College and later gave all of his energy to running Melley Auto Parts store, on South Broadway, in Red Hook, which operated from 1964 to 1985. Jimmy was the heart and soul of that auto parts store, and more than a few customers know how keen he was to serve his customers and how well he knew everything about the business and all its parts.

Jimmy is survived by six first cousins of the Frank and Margaret (Melley) Reardon family, Eileen, Mary, Sally, Geraldine, Marguerite, and John Reardon, of Canada; in the US, first cousins Steven Melley and Christopher Melley, along with Virginia (Madonna) Melley, of Red Hook

Iin addition to his parents he was predeceased by his brother George Melley, Jr.

There are no Calling hours.

A private grave side service will be held at St. Paul's Lutheran Cemetery of Red Hook.

Condolences may be expressed at yadackfox.com


Published by Poughkeepsie Journal on Oct. 2, 2016.
To plant trees in memory, please visit the Sympathy Store.
MEMORIAL EVENTS
To offer your sympathy during this difficult time, you can now have memorial trees planted in a National Forest in memory of your loved one.
MAKE A DONATION
MEMORIES & CONDOLENCES
2 Entries
Jimmy was a great young man and we are sorry to hear of his death.
Holly Simays
October 7, 2016
Jim's family,sorry for your loss. I graduated with Jim. When I went into his store he was so knowledgable in the business. He was such a smart person in school. In English class we had to write a short story. Most of us wrote the usual boring stuff. Not Jim,he wrote like Dr. Seuss. We thought he was nuts. Little did we know it was a style of writing. He was a quiet soul,yet one that will still be missed.
Ellen Allard
October 4, 2016
Showing 1 - 2 of 2 results