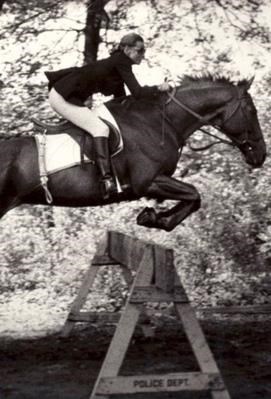 Ms. Korda was born in Canterbury, UK, on November 1 1937, the daughter of Paul and Kate Mogford, and started riding at the age of three. "I had been put to bed already," Ms. Korda recalled in article about her called "Don't Get in Margaret Korda's Way" in The Chronicle of the Horse, "but I was allowed to ride this pony in my pajamas and slippers. I was allowed to ride around the garden. It was the first time I ever felt a sense of power because I was higher than other people. I've always loved horses." At the age of nineteen she went to what was then the Colony and Protectorate of Kenya in search of adventure, and married Donald Williams a British police official in Nyeri. On her return to Britain two years later she met and was later remarried to Magnum photographer Burt Glinn, and frequently worked as his model, appearing on the cover of many magazines such as the Ladies' Home Journal.

Ms. Korda and her third husband Michael Korda met while riding on the bridle path in New York's Central Park—for months they trotted their horses around the reservoir in opposite directions until at last they rode around it in the same direction. For some years they kept their horses in what was then the only remaining livery stable in Manhattan, and eventually bought a farm in Pleasant Valley, Duchess County, New York, where Margaret rebuilt the stable to her own design, leveled the ground to create paddocks and an indoor riding ring, and eventually laid out a full training course with over forty fences and jumps, including a full water jump. Here she not only exercised and trained her own horses daily, but gave a yearly training event for over twenty years which drew over one-hundred fifty riders and horses at three levels, Baby Novice, Novice and Training, as well as putting on riding clinics given by such leading international eventers as Mark Weissbecker, in addition to competing in many major events on the east coast herself. She competed successfully well into her sixties, and in 1998 decided to remain at the Novice and Training levels. "People used to ask me why I just ride novice and training, but I'm 60 years old and I'm comfortable with it. . . I'm smart enough in the past few years not to go out and do something that's going to hurt me." On the other hand, she recognized her own fierce competitive spirit as a rider: "When I make up my mind to do something," she said, "I really go at it."

Ms. Korda is survived by her husband Michael, by her stepson Christopher and by her goddaughter Tamzin Blinkhorn. A funeral service for her all be held at Allen Funeral Home, 1605 Main Street, Pleasant Valley, N. Y. on Friday, April 28, between five and eight o'clock.

Margaret's illness was made bearable by the kind and compassionate care of Hudson Valley Hospice, to which contributions may be made in her memory.


Published by Poughkeepsie Journal from Apr. 26 to Apr. 28, 2017.
To plant trees in memory, please visit the Sympathy Store.
MEMORIAL EVENTS
Apr
28
Funeral service
5:00p.m. - 8:00p.m.
Allen Funeral Home - Pleasant Valley
1605 Main St., Pleasant Valley, NY
Funeral services provided by:
Allen Funeral Home - Pleasant Valley
MAKE A DONATION
MEMORIES & CONDOLENCES
Sponsored by Allen Funeral Home - Pleasant Valley.
18 Entries
In Memory of Ms. Margaret Korda. My husband Carlo grew up with David, in California. Carlo and I share this love of horses which also inspired Mr. and Ms. Korda. I feel encouraged by this woman who remained so active, which inspires me today. We send our encouragement to Michael Korda and his extended family.
Marian Douglas-Ungaro
December 14, 2019
I do not know either Margaret or Michael Korda. but only as a reader of their books I feel I knew them and came to know how much they loved one another. I think I have watched all of Mr. Korda's engaging TV appearances with enormous pleasure. I pray that he will be able to go on giving his readers the fruits of his gifts without her in his life, but we will easily forgive him that disability if he cannot manage that. I will add Margaret's name to my prayer list.

Howard Handlen
Brunswick, Georgia
Howard Handlen
October 20, 2019
Margaret and I had several connections but the primary one of our friendship was horses. Her and Michael were so generous with their time and encouragement in the equestrian world. Also, they would visit our restaurant weekly and even had Michael's retirement/birthday party. I had many long conversations with Margaret and enjoyed that very much. One I especially remember is of when she was riding & jumping the police barricades in central park.I was shocked to see that she had passed and saddened since I left NY in 2006. Thanks for the great memories Margaret.
Julie Holtzhouser
Friend
November 23, 2018
I am sorry to only now be finding this as I moved away from NY State long ago. I must still pay respect!
Margaret was indeed a great horse woman and promoter of a Dunkin Donut addiction as she treated us every morning. I worked for her traveled to shows and was with her when she lost the Great Nebraska old Ms Army Boots she called her! I adopted her beloved Chui the cat. He had 6 toes on each paw, tough grey tiger cat with a tear in his ear! Margaret always said he had a story he was keeping to himself. I am told I was privileged as I had the only cat to leave Stonegate said Libby! If you cared for Margaret's horses, you got to spend plenty of time with her. She would have us ride a lesson each week with Libby. Hack the cross country coarse and don't forget the bell on your stirrup during deer season! I learned a lot knew some great horses. Massouri who I Knick named Mazoo! Jimmy James, Star , Berry Bear Fox young silly Dundee her Irish man and of coarse Nebraska aka Ms Nebbs. Got her over anything. The horse world was glad to see Ms Nebbs retire and let someone else pin! Wow, just a great woman!
Please rest in peace Margaret
Ann Cook
May 15, 2018
Rereading Cat People and thinking of beautiful Margaret and her love for cats. I read of her passing and I know you miss her very much, which makes me sad. I will pray for peace for you.
Linda Zimmerman
October 8, 2017
Dear Michael
We are so sadden about the lose of Margaret.
The Bacon Family
April 28, 2017
So sorry for your lost, our thoughts and prayers are with you.

Aubrey & Nancy Kinney
Aubrey Kinney
April 28, 2017
I have such great memories of spending time with Margaret and Michael God Bless
Peter Garrity
April 28, 2017
Margaret, you were a truly unique and generous person, and you will be dearly missed. May all your rounds in Heaven be clear rounds.
Mary Skovan
April 28, 2017
Dear Michael.
We are so sorry to hear of the passing of Margret. Our prayers are with you and your family

Dennis and Jackie O'Hara
Dennis and jackie OHara
April 27, 2017
My condolences Michael. Margaret was a beautiful woman who I'll always remember as being a strong supporter of novice riders. May your memories and stories keep you in comfort during this time of sadness and grief.
Erin Keehan
April 27, 2017
Dear Mr. Korda,

We are so very sorry to hear of your loss.
Your beloved wife, Margaret, was a wonderful woman... a true lady. A lover of horses, cats, flowers and most of all, You.

Mea vanAlderwerelt- Smith & Russell Smith
Blumen Barn Smith Automotive
April 26, 2017
Always a kind word when Margaret competed at our farm, a true lady that understood how the sport of Eventing worked as she had run her own. Thank you for the years of support and the bottles of wine that made the end of competition day easier, our thoughts are with you, Rest In Peace. Our deepest condolences to Michael.
Fran Cross
April 26, 2017
So sorry to hear of Margaret's passing. Rest in peace. My deepest condolences to Michael and the family.
From: Sharon Pizzuti, Pleasant Valley Agency.
April 26, 2017
I am beyond sad to learn about Margaret's passing. There are no words to adequately describe how this grand lady touched my life as a fellow eventer. We shared a horse that I imported from Plattsmouth, NE, my beloved Sally Gee that Margaret renamed Nebraska. RIP Margaret Korda. You will not be forgotten. My deepest condolences to Michael.
April 26, 2017
I am so,sorry for her family she was such a dedicated and always a kind person I only knew her in the horse world which I think was one of her true passions but she was always just another horse person and it was a pleasure to know her... my prayers are with you all.
April 26, 2017
So sorry to here this.. Miss Margaret you were one of a kind . and will be truly missed. Rest in peace Margaret.
Toby Boyce
April 26, 2017
Our condolences May we find comfort at Psalms chapter forty six verse one GOD is a refuge and strength a help that is readily found
April 26, 2017
Showing 1 - 18 of 18 results