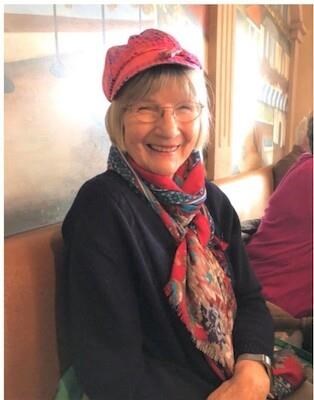 Gardiner - Mary Ann Osgood, 79, of Gardiner, NY, passed away on August 1st. She was born on April 14th, 1941, to Herbert and Mary Rose Alexander. Mary Ann graduated from New Paltz High School and the Crane School of Music at SUNY Potsdam. She married Paul Osgood in 1973. Mary Ann is survived by her loving husband, Paul, her daughter, Melissa Logan and son-in law, Robert Obester, and grandchildren Sofia Murillo and Diego Murillo. She was predeceased by her son, David Logan.

Music was always in Mary Ann's life. She was a music educator at several public schools in New Hampshire, and later struck out on her own as a private voice and piano instructor. She enjoyed community singing and sang in her church and community choirs. She was active in singing Madrigals, folk, and classical music. She and her husband, Paul, enjoyed being in many musical groups, including the St.Cecilia Chorus in New York City, where they sang Handel's Messiah in Carnegie Hall every Christmas. She also directed the chorus at the "Singing Christmas Tree" at the South Street Seaport. Locally, Mary Ann was the music director at the Union Presbyterian Church in Baumville in the 1990s and later was the choir director of the Helen Baldwin Singers at the Unitarian Universalist Fellowship of Poughkeepsie until the very end of her life.

Mary Ann was an advocate for women, for education, and for the environment. She volunteered at the Rape and Assault Committee of Nashua, helpng survivors of sexual assault re-establish their lives, and even testified on behalf of assault survivors at the New Hampshire state legislature. A passionate advocate for the environment, Mary Ann created and led the "Tree Huggers", a folk group that sang at local events. She continued volunteering in public service all of her life, and in later years was on the Gardiner Library Board and drove people to doctor's appointments through Neighbor to Neighbor Ulster Office of Aging.

Mary Ann always loved old things, and developed an interest in antiquing. She brought new life and usefulness to many things, from the farm house in New Hampshire that she and Paul bought because "they felt sad for it" to many pieces found in their Gardiner home. She and Paul were the proprietors of the Country Store of Gardiner Antique center for 17 years.

Mary Ann is best known for her friendly demeanor, her kindness and generosity, and her willingness to share her talents with everyone.

Instead of flowers, the family requests that donations be made to the Unitarian Universalist Fellowship of Poughkeepsie, NY.


Published by Poughkeepsie Journal from Aug. 5 to Aug. 6, 2020.
To plant trees in memory, please visit the Sympathy Store.
MEMORIAL EVENTS
To offer your sympathy during this difficult time, you can now have memorial trees planted in a National Forest in memory of your loved one.
MAKE A DONATION
MEMORIES & CONDOLENCES
1 Entry
Paul and family -
I was shocked to hear of Mary Ann's passing. Please accept my sincere sympathy. She was one of the first people Rich wanted to tell when we got engaged. He considered her a dear friend. May the memories help ease your loss.
Ellen Michaelis
Friend
December 28, 2020
Showing 1 - 1 of 1 results