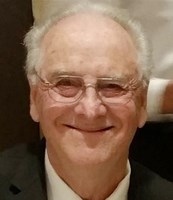 BORN
1940
DIED
2022
Roger Gene Schrader
Born: July 7, 1940
Died: January 7, 2022
Roger Gene Schrader, age 81 of Lanark, Illinois passed away Friday, January 7, 2022 surrounded by his family after a short, hard fought, battle with cancer. Farming from a young age, marrying his sweetheart and raising a family, even driving a dirt-track racecar from the age of 70 to 75, to bareback riding a horse in his late 70s, he didn't leave many stones unturned. At 80, he was still begging to water ski with the grandkids. He lived life to the fullest and made it well known how blessed he was.
Roger was born July 7, 1940, the son of Walter and Alice (Edler) Schrader. He is a 1958 graduate of the Lanark High School, excelling at gymnastics, baseball and football, where he earned the nickname "Night Train." In 1959, Roger received an agriculture degree from the University of Illinois Short Course Curriculum. While revving his pipes on his blue and white 1956 Ford Galaxy 2-door hardtop, he was noticed by his future sweetheart and life-long love, Lenore Nola VanMatre. On September 17, 1960, Roger and Lenore were married at the Evangelical United Brethren Church of Shannon. In 2021, they celebrated 61 years of wedded bliss. Jim and Teresa, their son and daughter, were two of Roger's greatest blessings.
Farming was Roger's way of life, at first with Joe Lower, then Ted Miller, and then 28 years with Arman Stover around the Lanark area. The last 26 years have been sharing his love of farming with the family. In addition to farming, Roger and Lenore worked as a team selling Super Crost Seed. The teamwork of Lenore selling and Roger delivering worked well as they enjoyed trips to Africa, Hawaii, Ireland, Puerto Rico, England, Switzerland, and Austria. Roger enjoyed raising cattle and hogs along with many special horses, donkeys, dogs, pigs, goats, skunks, raccoons, and cats. He was a great steward of the land and implemented many conservation practices to enhance the wildlife habitat for generations to follow. Roger farmed right up until the age of 81, which is quite impressive and an example of his work ethic, determination, and "watch this" mentality. Roger was a member of the Lanark Lions Club, Carroll County Farm Bureau and Soil & Water Conservation District and Lanark Church of the Brethren.
Roger learned to fly and enjoyed piloting a plane for twenty-five years. He also liked traveling across the Midwest to watch dirt-track racing with friends and family. To no surprise, at 70 years old, Roger was done watching people race and decided that it was never too late to become a race car driver. He raced many times between age 70 and 75, even racing against his grandson, Gabe. He also enjoyed horseback riding, the old family reunions, having coffee with his buddies, striking up conversations with strangers and becoming friends, studying historical photos of the surrounding area, and most of all just being with family, especially the grandchildren and great grandchildren.
Roger will be dearly missed by the love of his life, Lenore of Lanark; his beloved dog, Toby; his son, Jim (Roxanne) Schrader of Lanark; his daughter, Teresa (Jeff) Kirwan of New Windsor, Illinois; five grandchildren, Chelsea (Trenton) Diehl, Gabe (Kenzie) Schrader, Ashley (Keegan) Quinby, Katie (Sam) Burnett and Christina Kirwan; five great-grandchildren, Adalyn Diehl, Hudson Schrader, Wyatt, Evelyn and Beckham Quinby; and his brother, Ron (Pam) Schrader of Lena, Illinois.
He is preceded in death by his parents, Walter and Alice, and his in-laws, Lester and Avanette VanMatre.
A private family service was held Thursday, January 13, 2022 at the Lanark Church of the Brethren with burial in the Lanark Cemetery. Friends are invited to watch the service on Facebook at this link, http://bit.ly/3n7bRgX. Memorials may be given in Roger's honor to the Lanark Ambulance Association or the Lanark Church of the Brethren.
Published by Prairie Advocate from Jan. 10 to Jan. 19, 2022.
To plant trees in memory, please visit the Sympathy Store.
MEMORIAL EVENTS
To offer your sympathy during this difficult time, you can now have memorial trees planted in a National Forest in memory of your loved one.
MAKE A DONATION
MEMORIES & CONDOLENCES
3 Entries
Lenore and family, It has always been a pleasure to know Roger who was one of the friendliest people I have ever known. Probably the most up-beat person in our graduating class with a real don't look back attitude about anything and a broad window of acceptance of others and their views. May your grieving be personally rewarding and your memories be eternal. Love, Rex Dollinger class of '58
Rex Dollinger
Friend
January 14, 2022
In sympathy for your loss. Enjoyed talking to Roger about family connections and trying to figure where certain members fit in.
ARLENE KOELLER
Family
January 13, 2022
I was so sad to hear about Roger He was such a nice neighbor to me over the last 7 years. I will miss him calling me this winter while I´m in Florida. Asking me to send warm temps to Illinois. He had a way of making me smile with his witty personality. My thoughts and prayers are with you and your family.
Renee Krick
January 10, 2022
Showing 1 - 3 of 3 results