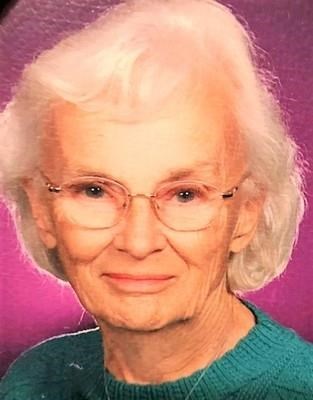 Donna Marie (Heim) Epley, 89, passed away on October 22, 2019 at Heritage Nursing Home in Mason City, Iowa after a long and courageous battle with Alzheimer's. She left a legacy of unconditional love and service to others.

Visitation will be November 29th from 4:00 to 7:00 PM at Sharon Center United Methodist Church in rural Kalona, Iowa. A Celebration of Life service will be at 10:30 AM on November 30th at the church. Donna wishes were to donate her body to the University of Iowa Deeded Body Program for research.

In lieu of flowers, Donna requested memorial gifts. They may be sent to the family in care of Dea Epley Birtwistle/ 275 N. Taft #202 /Mason City, Iowa 50401 or directed to Sharon Center United Methodist Church, or to the Red Bird Medical Clinic in Beverly, Kentucky. The Peterseim Funeral Home is assisting the family.

Donna was born in Beverly, Kentucky on January 3, 1930 where her father, Dr. Harlan Heim, was the first medical doctor in southeastern Kentucky, and a missionary at Red Bird and a licensed minister for what is now the United Methodist Church. Her mother, Golda Heim, was a high school teacher at the Red Bird Mission School. Her younger years were spent in the poverty-ridden mountains of Appalachia where she watched her father start the first child-wellness clinic, family medical insurance for the loggers, and build the first hospital in the area.

On May 11, 1952 she married an older classmate from Westmar College, Lloyd Epley, at the Methodist Church in Humboldt, Nebraska. They were married for 67 years, and Lloyd comments that marrying Donna was the best decision he ever made in his life. They modeled a wonderful partnership for their friends and family.

During their first year of marriage, Donna taught high school English in Ogden, Iowa while Lloyd was in Korea. Donna and Lloyd then settled into home in Coralville, Iowa. She was a life-long learner, and her involvement in many activities demonstrated her passion for diversity. She and Lloyd took vacations with their children to all 50 states primarily camping at national parks and also traveling to several European countries. They participated in mission trips to Red Bird in Kentucky, Guatemala, Mexico, Nome, Alaska, the Heifer Project in Perryville, Arkansas, McCurdy School in Espanola, New Mexico, the United Methodist Committee of Church Relief (UMCOR) in Baldwin, Louisiana, and Mission Jamaica. Later in life they enjoyed Elderhostel trips to Japan, Big Bend, Texas, and Canada.

In the 1980s, Donna returned to school, first getting an LPN through Kirkwood and then going on to obtain her RN license. She worked as a nurse at the University of Iowa Hospitals and Clinics for ten years caring for adults who had recently received a bone marrow transplant. When Iowa City Hospice started and needed adults to comfort those in their homes, Donna volunteered.

Donna was a vivacious and brilliant woman who was a natural leader and played that role in almost every organization she was a part of at both the local and state level. Governor Branstad acknowledged her with a state volunteer award. She was instrumental in starting the Coralville Library when she was a Girl Scout troop leader for her daughters. She was the president of Cardinal Girl Scout Council and later the Executive Director for the Girl Scouts of Eastern Iowa and Western Illinois, overseeing the merger with councils in Cedar Rapids, Davenport and western Illinois. As her son grew, she was also an active leader for the Hawkeye Area Council of Boy Scouts.

Steadfast faith radiated from Donna, and she was a Sunday School teacher and Bible School teacher for over 65 consecutive years at the churches she attended. She was active in United Methodist Women and Church Women United.

She was a member of PEO, Chapter KP in Iowa City and a 50-year member of the University of Iowa NN (No Name) Book Club. She was an active member of Sharon Center United Methodist Church in rural Kalona for over 65 years serving on many committees, primarily with education and missions. At the University of Iowa, she served as a docent volunteer for the Field Museum for many years conducting field trips.

Donna was acknowledged in the 2016 Coralville Parade for her community work, on the Parks and Recreation Commission and the Coralville Library. In 2018, she was the state recipient of the Trustee Award for the Iowa State Library Association. She was passionate about the baby book bags that she assembled and which were delivered to every new parent attending the library in Coralville.

Moreover, Donna was compassionate and gracious. Her home served as a hearth for many fantastic meals for new-comers to the community including international students as well as local and far-away friends. She was the first to offer help for a family experiencing a crisis and was the communication switchboard for her family. There were no strangers with her, only friends she had not yet met. Her greatest joy was her family, and her children and grandchildren modeled from her how to bird-watch and savor a good book.

Donna is survived by her husband Lloyd Epley of Mason City, her children, Dea Epley Birtwistle (John) of Mason City, and their daughter Anne of Milwaukee; Jean Epley Carleton and her children, Dr. Timothy Carleton (Justine) of Columbia, Missouri, Chris Carleton of Dallas, Texas, and Katie Carleton of Houston, TX; and her son, David Epley (Barb) of Indianola, and children Chloe Epley of Iowa City, Mina Epley of Cedar Rapids and Mitchell and Nathan Epley of Indianola. She embraced her husband's family and is also survived by many special nieces and nephews.


Published by the Iowa City Press-Citizen from Oct. 23 to Oct. 24, 2019.
To plant trees in memory, please visit the Sympathy Store.
MEMORIAL EVENTS
Oct
29
Visitation
4:00p.m. - 7:00p.m.
Sharon Center United Methodist Church in rural Kalona
IA
Oct
30
Celebration of Life
10:30a.m.
Sharon Center United Methodist Church in rural Kalona
IA
MAKE A DONATION
MEMORIES & CONDOLENCES
Sponsored by the Press-Citizen.
1 Entry
While Donna was a nurse at the UIHC, I knew her to be a compassionate nurse who always put her patients first. She worked well with her colleagues and was a treasure. I am sorry for your loss. Sally Mathis Hartwig.
Sally Mathis Hartwig
October 24, 2019
Showing 1 - 1 of 1 results