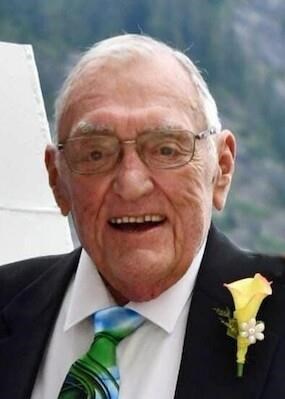 Grinnell - On Thursday, June 18, 2021, F. Addison Jones, loving husband, father, and grandfather passed away at the age of 92 at the Mayflower Community Health Care Center in Grinnell.

Addison was born on December 17, 1928, in Tama, IA to Fred A. (F. A.) and Alice Josephine Jones. He moved to Grinnell with his parents in the summer of 1940 which would become his lifelong home. Addison attended school in Grinnell from seventh grade through his sophomore year in high school before he attended Wayland Academy in Beaverdam, WI. As he recalled throughout his life "My folks had decided I'd go to Grinnell College and thought it would be a good experience if I had some time away at school."

Addison graduated from Wayland Academy in 1946. As a proud Grinnellian, his Grinnell High School graduating class of '46 always welcomed him to class reunions over the years even though his junior and senior years were spent at Wayland Academy. "Going to Wayland turned out to be very important in my life. I met my wife, friend, love…my everything to me."

Following high school, Addison returned to Grinnell to play football at Grinnell College and was awarded as an All-Conference Center in '48-'49. He received his Bachelor of Arts from Grinnell College in 1950.

His professional career began at Ottumwa High School from '50-'51 where Addison taught math. He then worked at a bank in Chicago from '51-'52 before becoming a Lieutenant in the Coast Guard. During his two years in the Coast Guard, he served out of Cleveland, OH, and Grand Haven, MI.

He returned to Grinnell in 1954 to begin his nearly lifelong career at Grinnell State Bank. During his 67 years, he attended the Graduate School of Banking Madison, WI from '55-'58, was named the Bank President in '72, and named the CEO and Chairman of the Board in '76. He was proud to work alongside his father, sons, and grandchildren. Addison continued to work at the bank through January 2021.

Addison had many passions including boating on the Mississippi River, fishing, and woodworking. Not only did Addison build his home but he also built two boats, Ad's Venture and Ad's Venture II. He enjoyed "snowbirding" to Northern Mississippi in Guttenburg, IA as well as exploring the world with Marion and friends. He enjoyed meals spent with his family, dancing with Marion, playing bridge and hearts with friends, and, of course, indulging in the occasional Manhattan.

Throughout his life, Addison was involved in Greater Grinnell Development, Kiwanis, Free Masons, Iowa Bankers Association, and the American Institute of Banking (AIB).

Memorials may be designated to the Grinnell Veterans Memorial Commission Building Campaign or to Grinnell Regional Medical Center Auxiliary, mailed in care of the Smith Funeral Home, PO Box 368, Grinnell, Iowa 50112. Memories and condolences may be shared with the family online at www.smithfh.com.


Published by the Iowa City Press-Citizen from Jun. 22 to Jun. 30, 2021.
To plant trees in memory, please visit the Sympathy Store.
MEMORIAL EVENTS
To offer your sympathy during this difficult time, you can now have memorial trees planted in a National Forest in memory of your loved one.
Funeral services provided by:
Smith Funeral Home
MAKE A DONATION
MEMORIES & CONDOLENCES
Sponsored by Smith Funeral Home.
0 Entries
Be the first to post a memory or condolences.