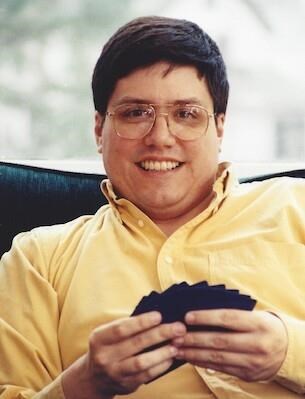 Seeing no future in the real world, he turned to bridge where he excelled. Bill became a Grand Life Master in 2006. Bill also won a national title in 2004 and numerous sectional and regional events. He not only participated in the bridge events but contributed greatly to the game by running numerous unit, local and regional events. He led the unit in points won for many years.

Bill enjoyed people, especially Iowa City bridge players. His greatest pleasures came as a club director where he helped many players who looked to him for support and advice and became his closest friends.

Bill loved to read all kinds of books—bridge, fiction, non-fiction. His home away from home was the Iowa City Library. He also enjoyed watching old movies.

Bill's wish was that his family and friends get together at Kent Park. When it is safe, there will be a celebration of life for him and his father (Tom Kent, who died November 21, 2020).

Thoughts may be shared with the family at

Published by the Iowa City Press-Citizen from Dec. 10 to Dec. 12, 2020.
To plant trees in memory, please visit the Sympathy Store.
MEMORIAL EVENTS
To offer your sympathy during this difficult time, you can now have memorial trees planted in a National Forest in memory of your loved one.
Funeral services provided by:
Lensing Funeral & Cremation Service
MAKE A DONATION
MEMORIES & CONDOLENCES
Sponsored by Lensing Funeral & Cremation Service.
2 Entries
I was shocked when I received my ACBL Bridge Bulletin and read Bill's obit. For years when I worked the many Northern Illinois tournaments, Bill was a beacon of youth in a sea of mature players. He made his presence felt by his ability to play well and his pleasant demeanor in a very contentious world. He will be missed. At 61, he leaves a void for his partners and the many students of the game that he encouraged to succeed. His smile maybe gone, but his memory will remain.
GERALD SZYMSKI
Acquaintance
January 31, 2021
It's been many years since we have talked. We had a good childhood together. I have a lot of memories of going to his house to play. We used to get a bunch of us together and play baseball on the Highlander field. It makes this that much more difficult to write. As we get older we grow apart but the memories remain. I am sorry to hear about his Father also. My thoughts & prayers are with the family. God Bless
David Larsen
Classmate
December 14, 2020
Showing 1 - 2 of 2 results