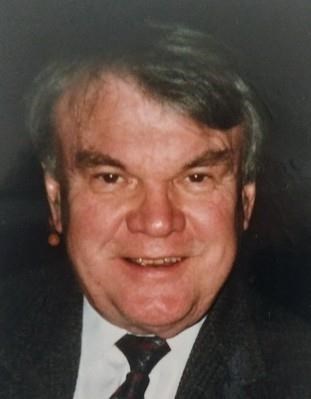 Binghamton - John Edmund Murray of Binghamton, New York passed away on Thursday, April 19, 2018. Mr. Murray was born November 9, 1929 in Brooklyn, New York to his father John Murray and mother Catherine (Martin) Murray. Mr. Murray received his J.D. in 1952 from St John's University School of Law. From 1952 to 1954 he served in the JAG Unit of the United States Army, was awarded the National Defense Service Medal and remained in the Army reserves until 1960. From 1954 to1956 he practiced law at Bevin & Welsh in NYC and achieved a Masters of Law Degree at New York University. He was a member of the New York State Bar Association and held a certificate of admission to the bar of the Supreme Court of the United States. In 1958 Mr. Murray moved to Binghamton, NY where he met his wife Mary. He practiced law at the firm of Palmer & Hackin until 1963 when he became a New York State Workers Compensation Board Referee. In 1964 he was elected President of the Broome County Young Republican Club. In January, 1966, he was appointed First Assistant Public Defender and served in that position until late 1971. In December 1971, Mr. Murray was appointed Broome County Attorney and held that position for almost twenty years. He was also an active member of the NYS Association of Counties. He 1991, he joined the law practice of Levene, Gouldin & Thompson LLP in Vestal , N.Y. and retired in 2003.

Mr. Murray was active in his church, St. Thomas Aquinas and often led readings on Sundays. A sports enthusiast, he loved playing tennis, basketball and skiing with his children. He was a loving father and grandfather to his nine grandchildren. He was preceded in death by his daughter, Pamela Marie and his two brothers Robert and Joseph Murray. Survivors include his wife Mary Christine, his sons William Wheeler Murray and his wife June, Edmund Christopher Murray and his wife Patricia, his daughter Laura K.M. Graves and her husband Anthony Graves and grandchildren Michelle and Julia Patane, Megan and Kaitlyn Murray, Grace and Edmund Murray, and Kira, Emilyn and Henry Wheeler. A Funeral Mass will be offered at St. Thomas Aquinas Church, Highland Avenue, Binghamton, Monday at 10 A.M. Burial will be in Calvary Cemetery, Johnson City. The family will receive friends at the J. A. McCormack Sons Funeral Home, 141 Main Street, Binghamton, Sunday from 1-3 P.M.

Published by Press & Sun-Bulletin on Apr. 22, 2018.
To plant trees in memory, please visit the Sympathy Store.
MEMORIAL EVENTS
Apr
22
Visitation
1:00p.m. - 3:00p.m.
J.A. McCormack Sons Funeral Home
141 Main St., Binghamton, NY
Apr
23
Funeral Mass
10:00a.m.
St. Thomas Aquinas Church
Highland Avenue, Binghamton, NY
Apr
23
Burial
Calvary Cemetery,
Johnson City, NY
Funeral services provided by:
J.A. McCormack Sons Funeral Home
MAKE A DONATION
MEMORIES & CONDOLENCES
Sponsored by the Binghamton Press & Sun-Bulletin.
2 Entries
I am very sorry to hear of the loss of your loved one. One day many will have the opportunity to live again. May the hope of everlasting life sustain and comfort you during this difficult time. John 17:3
K F
April 23, 2018
Dear Mary and Family: It is with great sadness to hear of the passing of Ed! He was a wonderful person with a great sense of humor! He also dedicated himself to the people of Broome County while serving as their Broome County Attorney! I have many fond memories of Ed while interacting with him on many issues in the Broome County Legislature! He will truly be missed! Our thoughts and prayers go out to you and your family! May God Bless all of you during this most difficult time!
Jim & Rose McCabe, Jr.
April 23, 2018
Showing 1 - 2 of 2 results