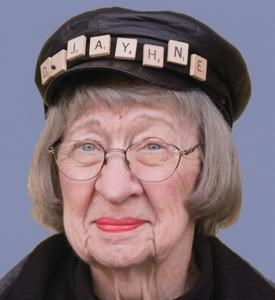 EDWARDS, Dorothy Jane Also known as D. Jayhne, passed away peacefully on December 27, 2014, in Santa Rosa, CA at the age of 94. She was born July 31, 1920, in Decatur, IL, and was a graduate of MacMurray College in Jacksonville, Ill. She is survived by her children Martin, Meredith, Marcia and Malcolm, as well as numerous grandchildren and great-grandchildren. She was preceded in death by her husband, Charles Edwards. D. Jayhne was a striking figure in our community, always dressed in unusual, brightly colored clothing. She loved hats and costumes, and was involved in liturgical dance performances, even into her mid-80s. She enjoyed writing poetry, and was proud to win a cooking contest that incorporated her face into the new Betty Crocker image some years ago. She was also a founding partner in the locally owned Merry Edwards Winery. A memorial will be held in Sebastopol later this year.
Published by Press Democrat from Jan. 21 to Jan. 26, 2015.
MEMORIAL EVENTS
MAKE A DONATION
MEMORIES & CONDOLENCES
4 Entries
Merry, We are sorry to hear about your mom passing. We miss both your mom and dad. We enjoyed visiting them in California. Bob, Laura and Norma Bishop
January 31, 2015
Merry, I am so sorry to learn that your mother has finally passed on to her final reward. Please extend my condolences to Martin, Marcia and Malcolm.
Bill Miller
January 25, 2015
My wife, Margrid and I have been close friends with DJ and Charles for the past forty years. We gathered together often, being only a few blocks apart in Santa Rosa, and often traveled together, including spending time together in East Berlin right after the wall came down. We entertained each other often, once eating and dancing with our visiting family from Hamburg in the Edwards home. Charles and I occasionally conspired on experimental engineering projects, both being engineers, and once I accompanied DJ on a weekend seminar on sacred dancing in Santa Cruz. In all, we met together often, which included trips to San Francisco on Christmases. We enjoyed each others' company immensely and often. They were both delightful, energetic, creative people and we shall always cherish our friendship with them. I venture they will be missed by all who knew them.
Bob Rock
Bob Rock
January 23, 2015
Merry, very sorry to hear about your mom
passing away. I have fond memories of your mom and dad while we were renting the place on Piner Road. Hope you are doing well.