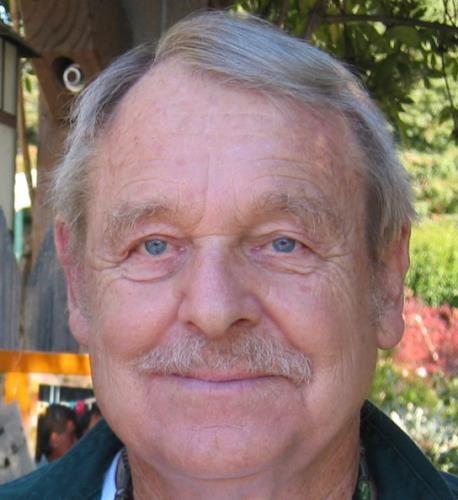 BORN
1934
DIED
2018
SAWYER, Harold Lamar (Oak) Born June 4, 1934 in Greenwich, Ohio. Died September 17, 2018 in Sebastopol, California. Oak grew up in Toledo, Ohio, went on to graduate from Ohio Wesleyan and Yale Divinity School. In the early 60s, Harold served as the Chaplain of Hiram College in Hiram, Ohio where he also began a family. He was married to Marilla (Tam) Rybolt and had three children, Roland, Sarah and Debbie. In '68 Harold and family moved to Albany, CA eventually landing in Cazadero as part of the "back to the land" movement. Harold became Oak and the College chaplain/renaissance man transformed into a green pioneer. He worked as a carpenter, building his own home more than once. Oak was an active member of the community all his life, loved science, especially cosmoloy, and was an avid gardener. During the last years of his life, he remained politically active as he struggled with various cancers. He was able to beat back kidney and bladder cancer but finally succumbed to pancreatic cancer. Oak is survived by his three children, six grandchildren, four (soon to be five) great-grandchildren and longtime companion Susan Snow. Celebration of life to be held at the Gazebo in Regal Ranch Park in Sebastopol on October 15th from 1-4 p.m. (potluck style).
Published by Press Democrat from Sep. 22 to Sep. 24, 2018.
To plant trees in memory, please visit the Sympathy Store.
MEMORIAL EVENTS
Oct
15
Celebration of Life
1:00p.m. - 4:00p.m.
Regal Ranch Park Gazebo
Sebastopol, CA
MAKE A DONATION
MEMORIES & CONDOLENCES
4 Entries
We really miss the pastor / carpenter.....
Jon Anderholm
Friend
September 16, 2019
Hal was a good friend of Larry and Mimi Becker all through Yale Divinity School as well as during our shared years at Hiram College, Hiram, Ohio where he served as College Chaplain. Our shared years of work in the civil rights movement will be long remembered as will our kids' early years. Oak and Larry reconnected in their final year of trying to fight back the pancreatic cancer advances, and Larry took Hal's advice that it was OK to peacefully transition from this life to whatever the cosmos held. And he did just that, after a 4 year no-win battle with that relentless villain! Thank you Hal/Oak.And his life partner for being there for him!
Dr. Mimi Larsen Becker
November 18, 2018
Freida Collins/Ehrsam
October 5, 2018
I will always consider Oak to be a dear friend and Pastor ... often contributing words of knowledge and wisdom ...
I am sure that he is resting in eternal peace,
joining that Cosmos that always kept him so interested .
Bless his good heart.