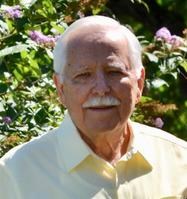 BORN
1927
DIED
2021
FUNERAL HOME
YAHN & SON FUNERAL HOME & CREMATORY
55 W VALLEY HWY S
AUBURN, WA
Lewis Francis "Frank" Ginnett
Lewis Francis ("Frank") Ginnett, a long-term Windsor, California resident, passed away peacefully on Thursday, September 16th, 2021 in Auburn, Washington at the age of 93.
Frank was born on December 29th, 1927, in Bellingham, Washington. Born to teenage parents, Frank overcame a difficult and unstable childhood. In addition to Bellingham and Seattle, much of his childhood was spent with his beloved Aunt Hazel on Shaw Island, Washington where he attended the famous "Little Red Schoolhouse." The Shaw Island years of his childhood were loving and stable and he remained forever fond of those memories and visited frequently. Shaw Island later became the focus of many family vacations.
As a gifted student, Frank graduated several years early from high school. Soon thereafter he volunteered for the U.S. Army serving honorably with the occupation forces in South Korea. With the G.I. Bill in hand Frank returned from military service and enrolled at University of Washington, earning a degree in chemical engineering.
After graduation, Frank relocated to California where he met the love of his life, Margaret Nugent, and remained happily married for 64 years until her death in 2019. Frank is survived by his six children Timothy (Dorothy), Monica, Martin (Noel), Karen Kauffman (Eric), Paul (Patricia) and David (Ying) and his nine grand-children and four great-grandchildren.
Most of Frank's career was spent with the U.S. Department of Agriculture as a research scientist and administrator at the Western Regional Research Laboratory in Albany, CA. As a talented mathematician and scientist, Frank held several patents and was frequently published in encyclopedias and scientific journals.
After retirement, Frank and Margaret relocated from Cupertino, CA to Windsor where he kept busy with genealogy, piano, gardening and volunteer work. Frank and Margaret were active members of Resurrection Roman Catholic Parish in Santa Rosa and St. Joseph of Cupertino prior to their move to Sonoma County.
Frank will be remembered as a loving father committed to providing the stability and opportunities for his children that he lacked in his own childhood. He was quiet by nature but always kept a keen sense of humor.
The family is planning a small, graveside service at a future date when he is inurned next to Margaret in the cemetery on Shaw Island.
Published by Press Democrat on Sep. 21, 2021.
To plant trees in memory, please visit the Sympathy Store.
MEMORIAL EVENTS
To offer your sympathy during this difficult time, you can now have memorial trees planted in a National Forest in memory of your loved one.
Funeral services provided by:
YAHN & SON FUNERAL HOME & CREMATORY
MAKE A DONATION
MEMORIES & CONDOLENCES
Sponsored by YAHN & SON FUNERAL HOME & CREMATORY.
1 Entry
My condolences to all six of you, your spouses, and all the grandchildren. I feel very sad I have lost a dear friend. Tom and I shared so many good times with him and Marge, meals, bike riding, trips to Calistoga where we laughed and laughed, and long conversations on Theology. His hearty laugh remains clear in my mind, and brings a smile to my face. Rest in peace, mu friend.
Rosie Nagle
Friend
September 25, 2021
Showing 1 - 1 of 1 results