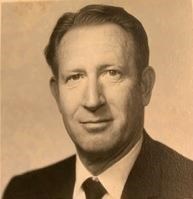 BORN
1924
DIED
2021
William Black
July 9, 1924 - July 6, 2021
Lt. Col (Ret.) William Black passed away with his daughter by his side July 6, 2021 after a long battle with cancer. He is survived by his daughter Tawni Johnson of Santa Rosa, CA and numerous nieces and nephews (grand and great grand).
He was born July 9, 1924 in Hooper, Utah, lived in Deeth, Nevada where his family was from until he moved to Stockton, California in 1926.
He completed three years of college at the University of Illinois, Champaign-Urbana.
He was married to Joyce Lester from September 3, 1961 until her death September 13, 1996 and predeceased by his son, Clayton Edward Black, his parents Edward Verrall Black and Sarah Elizabeth Black and his sisters, Doris Black Scott and Melba Bevilacqua.
He joined the Army Air Corps November 23, 1942 and made the Air Force his career serving until September 30, 1966. He was immensely proud of having served our country during three wars beginning with World War II, followed by Korea, and Vietnam.
As a young navigator based out of Hethel, England, his plane was shot down over Denmark where he was rescued by Danish farmers and smuggled into Sweden. He flew long range fighters in Korea and the Distant Early Warning Line during the conflict in Vietnam.
He moved to Santa Rosa in 1975 to enjoy his retirement. He had a lifelong love of learning. He loved, science, history, and politics. He took online classes until recently when he no longer could see well enough to continue. He loved gardening, houseplants and feeding hummingbirds.
The Air Force instilled in him a love of travel and in his retirement he visited China, South America, and Copper Canyon, Mexico and took his daughter with him to Canada, Russia, Australia, New Zealand, and one of the final flights of the Concorde to London and the train to Paris.