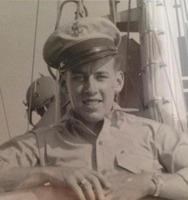 William L. Nellor
It is with heavy heart to announce the passing of William L. Nellor on April 8th, 2020. Born in Portland, Oregon on September 12, 1923. Beloved brother, husband, father, grandfather, great-grandfather, war veteran and local artist he has made a lasting influence on many.
In his early life, William Nellor served in the Navy as a combat medic attached to the marine division in the South Pacific during World War II. He lost his brother, Robert Nellor (USS Liscome Bay) to a Japanese missile during the war.
Nellor went on to graduate from the Cornish College of the Arts in Seattle and later met his wife, Ave Nellor, in San Francisco, CA. After marriage they had two kids, Gina and Robert, named after his late brother.
He went on in pursuance of his career in art working for an advertising agency in San Francisco to opening his own business when the family relocated to Santa Rosa, CA in the 1970s. Being a forward thinker and visionary, he constantly experimented with applying different techniques to each production and series he created. In the 1960s he had an ongoing comic series in the Press Democrat called the "Funny Fizzles" which were all based on real life patented inventions that never made it to production. Quite humorous. He also created "Clo" the cow mascot for the Clover Milk Company of Sonoma that we have all come to know and love.
After retiring, Nellor and his wife, Ave, spent nine years living in Maui, a place he always had been intrigued by. Together they focused on pursuing a simpler life and he took the opportunity to create for the tourist trade.
Even after retirement Nellor continued with his passion for art by painting, creating projects together with his grandkids, and designing greeting cards on the computer for loved ones' birthdays and holidays.
Nellor was also a forward-thinking political environmentalist and a member of the Sierra Club. "The excitement of youth and its influence on a person's career and life add to the broad experience of living." -William Nellor, The Sierra Club
He is survived by his wife, two children, grandchildren and great-grandchildren. The time they had to spend together was precious and memorable and his presence in our lives will be forever missed.

Published by Press Democrat on Apr. 12, 2020.
To plant trees in memory, please visit the Sympathy Store.
MEMORIAL EVENTS
To offer your sympathy during this difficult time, you can now have memorial trees planted in a National Forest in memory of your loved one.
MAKE A DONATION
MEMORIES & CONDOLENCES
1 Entry
It is with much sadness to learn of the passing.Though we had not been in touch very often since his move up north, but in the early days with Wally Sommers we played much tennis in Sausalito at night. With sadness I will miss Bill. My condolences to the family.
Sincerely,
Dave Broad
April 12, 2020
Showing 1 - 1 of 1 results