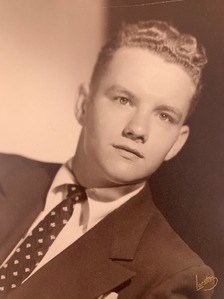 Scotti, Daniel J., - 88, of Ventnor, passed away on September 21, 2020. Born July 29th in Philadelphia, he grew up in Upper Darby before moving to Margate at the age of 14. He joined the Navy and shortly after became a Margate police officer. He retired from the police force and opened his own landscaping business which served him to retirement. He met his wife Kathleen at a local bar in Margate on Psalm Sunday 1962. There was one seat left in the joint and it was next to Kathleen. He sat next to her everyday for the next 52 years until she passed away in 2014. Survivors include his three daughters Kathleen (James), Michelle, and Danielle; his twin brother Frank; his grandchildren Steven (Nicole), Raquel (Ed), Derek (Jessica), Jimmy, and Kelly; his great grandchildren Anthony, Jayson, Brianna, and Logan; and his many cousins. Daniel was preceded in death by his wife Kate, his brother Joey, his cousin Kenny, and his parents Frank and Marie. His mass and burial was private due to his wishes. He was buried at the Atlantic County Veterans Cemetery in Estell Manor on September 25, 2020. Arrangements by the George H. Wimberg Funeral Home, Linwood – Ventnor. Condolences may be extended to the family at ghwimberg.com.
To plant trees in memory, please visit our Sympathy Store.
Published by The Press of Atlantic City on Sep. 27, 2020.
MEMORIAL EVENTS
No memorial events are currently scheduled.
To offer your sympathy during this difficult time, you can now have memorial trees planted in a National Forest in memory of your loved one.
Funeral services provided by:
George H Wimberg Funeral Home
GUEST BOOK
0 Entries
Be the first to post a memory or condolences.