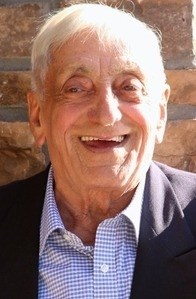 TURANO, Armand, - passed away on Friday, February 12, 2021 at the age of 91 years old. Armand was predeceased by the love of his life, his wife, Elvira; his mother, Mary; his father, Joseph; his six brothers and his sister. Armand is forever loved by his family which includes his children, Marybeth, Gerard, John and Joseph (and wife, Kathleen); grandchildren, Brian, Rebecca, Elizabeth and Meagan. Armand was born in Nutley, NJ and later resided in Mahwah, NJ until his and his wife's retirement to Cape May in 1997. Armand served his country as a medic in the U.S. Army Medical Corps during the Korean War. Later, he worked, until his retirement, in food service management for nearly 60 years. Armand's Mass of Christian Burial will be celebrated on Thursday (Feb. 18th) at 12:30pm in Our Lady Star of the Sea Church, Cape May. There will be a viewing in the Spilker Funeral Home, 815 Washington St., Cape May prior to Mass on Thursday from 11am until 12pm. Interment will take place in Maryrest Cemetery, Mahwah, NJ on Friday (Feb. 19th) at 1pm. In lieu of flowers, memorial contributions are suggested by the family to St. Jude Children's Research Hospital. Condolences: spilkerfuneralhome.com
To plant trees in memory, please visit our Sympathy Store.
Published by The Press of Atlantic City on Feb. 16, 2021.
MEMORIAL EVENTS
Feb
18
Viewing
11:00a.m. - 12:00p.m.
Spilker Funeral Home
815 Washington Street, Cape May, NJ 08204
Feb
18
Mass of Christian Burial
12:30p.m.
Our Lady Star of the Sea Church
, Cape May, New Jersey
Feb
19
Interment
1:00p.m.
Maryrest Cemetery
, Mahwah, New Jersey
Funeral services provided by:
Spilker Funeral Home
GUEST BOOK
3 Entries
We are so sorry for the loss of your We are very sorry for the loss of your Dad. I, Pat, met him at the very happy occasion of my sister and Joe's wedding. We pray that God gives you comfort at this sad time.
Pat and George Frimel
February 20, 2021
Marybeth, Gerard, John & Joe: So sorry for the loss of your Dad. We will have a mass said in his memory. He was a very nice person. May he and your Mom rest in peace.
Anne Marie & Ed Zadzora
February 18, 2021
I first met Armand in 1969 when I went to work as a fellow manager at the Shop Rite in Rochelle Park. From day one he made me feel welcome and a friend. Enjoyed working with him. After we left Shop Rite we lost contact but I never forgot what a great person he was. May he Rest In Peace .
Jim Gallagher
Coworker
February 16, 2021