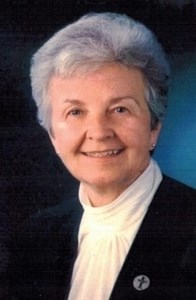 BORN
1938
DIED
2021
ABOUT
Cathedral High School
FUNERAL HOME
Higgins Home for Funerals, Inc.
752 Mountain Blvd
Watchung, NJ
Szubrowski, Sr. Diane, - 83, of Watchung, Sister Diane Szubrowski, 83, former president of the New Jersey Regional Community of the Sisters of Mercy of the Americas died peacefully on July 7, 2021 at McAuley Hall Health Care Center, Watchung, after a brief illness. The only child of Joseph and Helen Szubrowski, Sister Diane was a native of Trenton, NJ. She graduated from Cathedral High School, Trenton, in 1955 and entered the Sisters of Mercy upon graduation. She spent her early years teaching in St. Francis School, Metuchen; St. Mary Elementary School, South Amboy; and St. Elizabeth School, Bernardsville. She returned as principal of St. Francis School before her appointment in 1974 as Personnel Director for the Sisters of Mercy. In this capacity, she earned the love and respect of the sisters whom she served. In 1978 Sister Diane was elected Councilor for the Sisters of Mercy of New Jersey, serving for eight years as an advocate for peace and justice. As founder and director of Mercy Peace Center in Watchung, she lectured, traveled, and hosted events to bring the message of peace to others. Recognized for her leadership skills and compassionate care for the sisters, in 1994 she was elected President of the New Jersey Regional Community of the Sisters of Mercy of the Americas, a position she held for 13 years. Sister Diane earned a bachelor's degree in elementary education from Georgian Count College (now University), and a master's degree in education as well as a master's degree in social work from Rutgers University. She served as a family therapist at Catholic Charities in the Diocese of Metuchen from 1988 to 1994. In 2005 on the occasion of her Golden Jubilee in the Sisters of Mercy, the sisters honored her at their annual Benefit Dinner Dance. In the introduction that evening, it was noted that her compassionate interest in others led her to become involved for more than thirty years in issues relating to drug and alcohol abuse. In 2007 Catholic Charities named her the honoree for their annual Flame of Charity Dinner, giving testimony to her years of dedication and her living out the Mercy core values of service, compassion, justice, respect, and integrity. In 2008 Sister Diane began a new phase of ministry at Georgian Court University, where she served on the administrative staff in the Office for Institutional Advancement and later as a volunteer for donor relations until 2019. Sister Diane is survived by loving cousins and members of the Sisters of Mercy who will miss her deeply. Visitation will take place at Mount Saint Mary, 1645 Highway 22, Watchung, NJ on Friday, July 16, 2021. Wake: 9:00 – 11:00 AM Welcome Home 9:30 AM Funeral Mass 11:00 AM Burial will be at a later date. Memorial donations may be made to Sisters of Mercy of the Americas, 1645 US Hwy. 22 West, Watchung, NJ.
Published by The Press of Atlantic City on Jul. 15, 2021.
To plant trees in memory, please visit the Sympathy Store.
MEMORIAL EVENTS
Jul
16
Service
9:30a.m. - 9:30a.m.
Mount Saint Mary
1645 Highway 22, Watchung, NJ
Jul
16
Mass of Christian Burial
11:00a.m.
Mount Saint Mary
1645 Highway 22, Watchung, NJ
Funeral services provided by:
Higgins Home for Funerals, Inc.
MAKE A DONATION
MEMORIES & CONDOLENCES
Sponsored by Higgins Home for Funerals, Inc..
0 Entries
Be the first to post a memory or condolences.