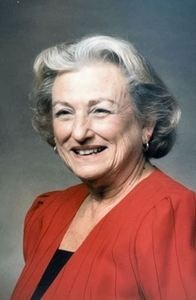 BORN
1926
DIED
2020
Marino Barbiero, Elaine Marie, - 94, of Linwood, passed peacefully unto the Lord on Friday, September 11, 2020 at DePaul Healthcare at Rose Hill in Robbinsville, NJ. Elaine was born on March 6, 1926 in Brooklyn, NY to Catherine and Carmine Marino. She graduated from Bay Ridge High School in 1944. She was a resident of Brooklyn, NY, where she met her husband Rudolph Barbiero. They were married in 1950 and moved to Massapequa Park, NY a few years later. She worked for ASCAP in Manhattan until the birth of their first son, Randolph. Three years later, their second son, Douglas, was born. In 1965 the family moved to Linwood, NJ. When the sons attended Mainland Regional High School, Elaine and Rudy were band boosters, helping with uniforms and anything else that needed to be done by adults. During the summers the family joined the local swim club where Elaine met friends and had a great time. The family also became involved in church activities and every Christmas Eve would attend Midnight Mass, the boys playing trumpet with the choir. After the Mass, the Barbieros would rush home to host a party for their many friends and family. After her husband passed away, Elaine volunteered for the Red Cross, helping with blood drives. She also was a member of the Red Hat Ladies and enjoyed gardening and canning. She enjoyed music and was a big fan of Frank Sinatra, Luciano Pavarotti, Kenny Rogers, and Blake Sheldon. One of the happiest days of her life was when her granddaughter, Brianna Marie Barbiero, was born. She loved her visits with Brianna, taking her to the pool in Linwood, the Ocean City beach, and Walt Disney World. Elaine was a world traveler; Russia, Italy, and Japan were some of the places she visited. Elaine is survived by her son Randolph Barbiero and daughter-in-law Lisa Roche of Lawrenceville, NJ, her son Douglas Barbiero and daughter-in-law Debbie of Poinciana, Florida, and her granddaughter, Brianna Barbiero of Orlando, Florida. In lieu of flowers, memorial contributions may be made in Elaine's name to the Red Cross of America (RedCross.org) and/or the Alzheimer's Association (alz.org). Funeral arrangements are under the care of the Adams Perfect Funeral Home.
To plant trees in memory, please visit our Sympathy Store.
Published by The Press of Atlantic City on Sep. 13, 2020.
MEMORIAL EVENTS
No memorial events are currently scheduled.
To offer your sympathy during this difficult time, you can now have memorial trees planted in a National Forest in memory of your loved one.
Funeral services provided by:
Adams-Perfect Funeral Homes, Inc. -
GUEST BOOK
1 Entry
Loved her spirit! My sincere condolences to Doug, Randy and their families.
Dawn Bataille Oliver
Friend
September 13, 2020