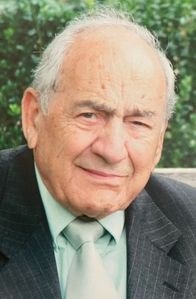 FUNERAL HOME
Demarco-Luisi Funeral Home
2755 South Lincoln Ave
Vineland, NJ
Palmieri, Col (Ret) Frank, Sr., - 96, of Vineland, born January 21, 1925 in New Haven, Ct, passed away at home surrounded by family on Sunday, November 28, 2021. Frank moved to Vineland, NJ while in high school and became a lifelong resident. He was the son of Alfred and Josephine (San Giovanni) Palmieri and married Shirley Kemmerer of Hammonton in 1955. Frank and Shirley recently celebrated their 66th wedding anniversary. Out of high school, Frank volunteered to serve our country during World War II. He was a combat veteran of both the European and Pacific theaters of operations. After the war, Frank graduated from Glassboro State Teachers College and started his education career as a teacher before becoming the Principal of Stratford Public School. He went on to join the NJ National Guard (NJNG) as a 2nd lieutenant. He served in command positions, up to Battalion Commander. At the NJ Military Academy, he served as director of operations and deputy commandant. During his service in the NJNG, Colonel Palmieri also served as the Inspector General (IG). Upon his retirement from the National Guard, the First US Army Reserve assigned Col Palmieri as a liaison to the NJNG. After leaving education, Frank worked the next 20 years as a successful businessman at South Jersey Glass and DPR (Diversified Production Resources), an educational video production company, advertising agency and public relations firm. On Sundays, Frank loved listening to Frank Sinatra in the morning, watching his Eagles in the afternoon and then enjoying some delicious macaroni with meatballs, pepperoni and braciole. You could always find Frank at the kitchen table playing his daily scrabble match with his daughter Kim or completing the daily crossword puzzle. Frank is predeceased by his parents; his sisters, Frances Toffanelli, Louise Marotti and Irene Palmieri; and his brother, Alfred Palmieri. Frank is survived by his wife, Shirley; five children, Kim Selby (Mike) of Vineland, NJ, Nancy Palmieri of Brigantine, NJ, Frank Palmieri, Jr (Ludmila) of Haddonfield, NJ, David Palmieri (Christine) of Phoenix, AZ and Cathy Petrini (Robert) of Rutland, VT. Also surviving are his ten grandchildren, Robert Luciano of Myrtle Beach, SC, Cara Pelchat (Mike) of Oak Ridge, NJ, Lindsey (Danny) DeBello of Cherry Hill, NJ, Frank Palmieri, III (Samantha) of Haddonfield, NJ, Alec Palmieri of Philadelphia, PA, Eric Palmieri of Nashville, TN, Austin Palmieri, of Lafayette, IN, Grace Palmieri of Seattle, WA, Jacob Petrini of Miami, FL and Dr. Ryan Petrini of Canton, GA; six great-grandchildren, Annabella Luciano, Julianna and Ella Pelchat, Brody and Ava DeBello; and several nieces and nephews. Relatives and friends will be received on Wednesday, December 1, 2021 from 10:00am until 12:00pm at DeMarco-Luisi Funeral Home, 2755 S. Lincoln Ave., Vineland. A funeral service will follow at 12:00pm. Interment will be held privately. In lieu of flowers, consider sending a donation to a charity of your choice in Frank's name. Masks will be required at the funeral home regardless of vaccination status. Memories, thoughts, and prayers may be extended to the family by visiting dlfuneral.com.

Published by The Press of Atlantic City on Nov. 30, 2021.
To plant trees in memory, please visit the Sympathy Store.
MEMORIAL EVENTS
To offer your sympathy during this difficult time, you can now have memorial trees planted in a National Forest in memory of your loved one.
Funeral services provided by:
Demarco-Luisi Funeral Home
MAKE A DONATION
Please consider a donation as requested by the family.
MEMORIES & CONDOLENCES
Sponsored by Demarco-Luisi Funeral Home.
0 Entries
Be the first to post a memory or condolences.