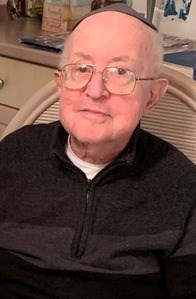 BORN
1932
DIED
2021
Felder, Dr. Herman, - 88, of Ventnor, Born October 8, 1932 in Montevideo, Uruguay, to Jennie (nee Neuman) and William Felder. He was the oldest of three boys. He moved to Pittsburgh at the age of 14 where he lived for most of his adult life. He and his wife were summer residents of Ventnor, NJ for over 40 years and made it their permanent home in 2018. He married his high school sweetheart Raye in 1954. He was a loving and devoted son, husband, father, and grandfather. He attended the University of Pittsburgh (Pitt) for his undergraduate degree. He graduated from Pitt Medical School in 1958 and then did his residency at Eye and Ear Hospital in Pittsburgh. He served as a captain in the United States Army from 1962-1964 in Fort Leonard Wood, Missouri as head of the Ear Nose and Throat clinic on the base. He was a pediatric ENT doctor in Pittsburgh for 35 years before his retirement in June of 1995. People from the tri-state area of West Virginia, Ohio, and Pennsylvania came to see him as patients. He was president of Eye and Ear Hospital and the Pittsburgh Otological Society. He was a doctor's doctor. He loved the children who saw him as patients. He carried stuffed animals in his pocket to entertain them and make them comfortable during exams. Dr. Felder was an active and dedicated member of many Jewish organizations including serving as gabbai of Rodef Shalom Synagogue in Atlantic City. He loved to travel and take road trips with his wife. He enjoyed summers at the beach and walks on the boardwalk. Survived by his beloved wife of 66 years Raye (nee Sternberg). Loving father of Neil (Suzette), Murray (Cecila), Dr. Louis (Dr. Jill), and daughter Susan Felder. Adoring Zadie of Viti (Abie) Merkin, Laivi, Avigdor, Eliana, Asaf Felder and great Zadie of Emunah Esther ""Emmy". Brother of Martin (Marilyn) and the late Donald Felder. Brother-in-law of Marsha Felder. Also survived by his uncles, aunt, and many nieces, nephews, cousins, and friends. Funeral service and interment were held on Sunday. Contributions in his memory may be made to either: Poale Zedeck Synagogue, Pittsburgh, PA www.info@pzonline.org Rodef Sholom Synagogue, Atlantic City, NJ 609-345-4580. Chabad at the Shore, Ventnor, NJ [email protected]. Funeral arrangements were entrusted to Roth Goldsteins Memorial Chapel. www.rothgoldsteins.com
To plant trees in memory, please visit our Sympathy Store.
Published by The Press of Atlantic City on Feb. 23, 2021.
MEMORIAL EVENTS
No memorial events are currently scheduled.
To offer your sympathy during this difficult time, you can now have memorial trees planted in a National Forest in memory of your loved one.
Funeral services provided by:
Roth-Goldsteins' Memorial Chapel
GUEST BOOK
4 Entries
Dear Raye: Please accept our deep sympathy and heartfelt condolences on the passing of your wonderful husband and our favorite ENT physician! He took care of our entire family. Thank you so!!
Cyril H. Wecht M.D. and Sigrid Wecht
March 1, 2021
Our deepest sympathy to Raye and family. May Herman Rest In Peace .
Roger & Susan Duerksen
February 27, 2021
Sincere condolences for your loss.
Jerry and Myra Greenberg
February 26, 2021
My thoughts and prayers are with you at this time of sorrow. I am so sorry for your loss. God bless. David.
David R. Thierman
February 25, 2021