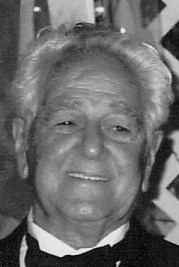 POLISANO, MAJOR SALVATORE ANTHONY "TONY" - U.S. Army, Retired: 93 years young, went home to be with His Lord and Savior Jesus Christ at 6:00 P.M. on July 24, 2013. He was married to the late Elizabeth "Bobbie" Tweed Polisano. Bobbie was the love of Tony's life and the mother of their surviving six children who love and miss them dearly. Tony was married to his "Bride" - as he proudly and lovingly introduced her - for 69 years; his love and devotion to Bobbie was unequaled. Tony was also predeceased by his parents, Joseph and Mary (Martinovich) Polisano; brother, Joseph Polisano and sister Kathryn Guglielmi. Tony leaves behind his children, Sharon Masterson, Maureen Hakalmazian (Gregg), Coleen Polisano-Snyder (Donald), Robert Polisano (Joan), Pamela DeVinney (James) and Lisanne Casalinuovo; 12 grandchildren, Erin Castorani (Thomas), Anthony Masterson (Jennifer), Danielle Javorka (John), Cynthia Skipper (Neil), Victor Wasilauskas (Kelly), James (Wasilauskas) Polisano, Heather Paulsgraf (Francis), Michael Wasilauskas, Nicole and Kristen Polisano, Brandon Astin (Kelly) and Taylor Astin; 16 great-grandchildren, April Frank, Courtney and Joshua Masterson, Allison and Andrew Javorka, Samantha, Jessica, Rebecca, Wyatt and Veronica Skipper, Sadie, Elijah and Hannah Wasilauskas, Anthony, Quinton and Alyssa Paulsgraf. The family wishes to extend many thanks to all of their Dad's physicians for their loving care over the years, especially Dr. Bill Wixted and Dr. Joe Harhay for being available whenever they were needed. They have gone above and beyond! I am sure the medical staff will miss Tony's perpetual greeting, "Never fear, Antonio's here!" Tony was a graduate of Atlantic City High School and the N.J. College of Commerce. He eagerly and proudly enlisted in the U.S. Army at the outbreak of World War II and became an officer and paratrooper in the 82nd Airborne, Company E 505th Parachute Infantry. Tony jumped into Saint Mere Eglise in Normandy on D Day ("A Bridge Too Far") and fought in the Battle of the Bulge. He was awarded the Purple Heart. Following the war, Tony enlisted in the NJ National Guard and became the Battalion Exec of the 105th Howitzer Battalion in Atlantic City and completed his military career at the Stork Army Reserve Center in Northfield. During this time, Tony worked in various aspects of the construction industry. In 1973, he launched ANPO Construction, where he remained until his retirement at the age of 78. Tony was very active in the community and was a member of the following organizations: Past President and member of Pleasantville Kiwanis Club, Optimist Club, Sons of Italy, UNICO, Tuna Club of Atlantic City, Investment Club, Computer Club, Inlet Social Club, Power Squadron, VFW, American Legion, Director and member of Military Officers Association of America (MOAA), Republican Club, Mainland Chamber of Commerce, Building Contractors Association of Atlantic County, Planning Board of City of Pleasantville. He was Trustee of the Laborers International Union Local 415 Pension, Health & Welfare Funds. Tony was a former member and usher at St. Peter Church and current usher and member of St. Bernadette Church. In his spare time, Tony loved to take the guys out fishing and the girls for a thrill ride in his boat, "Tony's Last Hope." During football season, he liked to hang out with the guys watching his favorite team, the Eagles. He enjoyed playing cards at the Inlet Social Club and American Legion in Absecon and Northfield. In his younger days, Tony enjoyed riding horses on the beach and was an avid motorcyclist. He was a risk-taker and a daredevil his entire life but also had a gentle and protective way with his family. He greeted his wife and children with a hug and kiss first thing in the morning, leaving for and returning from work and at bedtime! Tony hosted an American History Book Club at his home "with the guys from Greentree Church." He very proudly displayed the American Flag at his home and it was not unusual for him to become very emotional when pledging allegiance to the flag of the USA. He was a man of honor, valor and integrityâ€¦a true Patriot. He met all of life's challenges with bravery and endurance. Relatives and friends are invited to call Wednesday morning from 9:30 to 11:00 am at St. Gianna Parish; St. Bernadette Church, 1421 New Road, Northfield, NJ, followed by Mass of Christian Burial. Interment will be private. (George H. Wimberg Funeral Home)

This obituary was originally published in The Press of Atlantic City.
Published by The Press of Atlantic City on Jul. 28, 2013.
To plant trees in memory, please visit the Sympathy Store.
MEMORIAL EVENTS
To offer your sympathy during this difficult time, you can now have memorial trees planted in a National Forest in memory of your loved one.
MAKE A DONATION
MEMORIES & CONDOLENCES
22 Entries
One of kindest and the most genuine person I've met. Typically, when I'm reading an obituary, I'm feeling sad... Still can't take this smile away after reading about the BEAUTIFUL life he lived and how well his children turned-out. God bless his entire family. The man is still loved by anyone who met him.
Robert Saienni
October 7, 2013
Tny was a loyal member of VFW Post 2389 and later 8098.
Dick Simmons
August 2, 2013
We will never forget how wonderful Tony was in helping us to rehab the beach house that we bought in 1972. He would often take us to dinner to discuss the construction plans......a different little Italian restaurant each time where he was always greeted with hugs and kisses.
Dr. & Mrs. Jud Feldman
August 1, 2013
I enjoyed Tony's company over the years. A great guy, a great club brother, and sometimes a great card player. Rest in peace Tony and God bless us all.
John King
July 30, 2013
Tony, may you rest in peace now as you are above with the brightest angel on earth "bobbie" the love of your life, give her a kiss on the cheek for us..In our minds & hearts forever!
joanne ospina
July 30, 2013
Polisano Family and Friends, What an endearing man and a interesting life he lived. I am saddened to hear of your loss. Tears are shed but my memory of him makes my heart smile as well as yours. Love you
Carol Fleming
July 30, 2013
My sincere condolences to the family. I only met Maj Tony briefly in AC and took to him instantly. What a good man and great soldier. A true member of "The Greatest Generation"
CWO Bernie Lorenz
James Lorenz
July 30, 2013
We pray for comfort and peace during this time of bereavement:Tony's homegoing.
God bless and keep you in His tender, loving care.
Ric & Roberta Thompson
July 29, 2013
Sorry to hear about Tony's passing. My thoughts and prayers are with all the Family.
Gary Cress ( Inlet Club)
July 29, 2013
Our thoughts and prayers are with your family
Lisa Post
July 29, 2013
Sorry for you loss. Tony got me to join the NG in 1956. I stayed in for 8 years.
Tony was a great guy.
Carl Tienken
July 29, 2013
Sorry for your loss. Tony got me to join the NG in 1956. I stayed in for 8 years.
Great guy.
July 29, 2013
What a full and productive life Tony had. God just procured another loving and wonderful member in His kingdom. May his soul rest in peace. Tony Radice
July 29, 2013
The Polisano Family
We are grieved beyond expression to learn of your great loss. God bless and comfort you

Dan D'Amico- Wildwood crest, NJ
Donato D'Amico
July 29, 2013
We were so sorry to hear of your loss. The thoughts of many are with you at this time of sorrow.
Gert & Ed and Kline Construction Co.
July 28, 2013
I love you Pop Pop you are the best grandfather ever. You will always live on in all of our hearts. Tell Gan Gan we all love her. We will see you both again in heaven.
Brandon Astin
July 28, 2013
When I was a 2nd Lt, Major Tony Polisano was my BN XO and a fine Artilery Officer. All the RedLegs of the 157th Field Artillery Battalion Assn will miss him.
Charles J Coyle LTC FA (Ret)
July 28, 2013
My Darling Sweet Dearest Loving Daddy, The years have gone way too fast. It seems like only yesterday that I was playing on the docks while you fiddled on your boat, rode with you to check on your jobs, made our Saturday morning runs to the Italian market and of course our Saturday night candy store raids and your delicious popcorn in time for "our" shows. I always wanted to be with you. You stopped at my home when I was married everyday to kiss my children and sat by my side many times as an adult when I was ill. I could never have had a better dad. You were my champion and my hero. I can never think of your service to our great country without crying. My young daddy jumping into those icy waters in the dark not knowing what lie ahead. So brave, so patriotic, such a man of honor and great strength. I am so proud to be your daughter. As you used to say to Mommy , " I love you always and all ways" Ditto to you my daddy, I miss you.
Lisanne Polisano
July 28, 2013
My condolences to the family. Tony was a gentleman and a man whom I greatly respected. I'm sure he will be missed by all that new him.
Joseph Pallone
July 28, 2013
My Dearest Daddy, I love you so very much and miss you terribly. All of my wonderful memories of our great times together through the years will be ever present and joyful in my heart and mind. You are our hero. I am so happy that you and my husband Jim had such a wonderful 20 years of watching Eagles football together every Sunday. The two of you had bonding and all of your war stories and chats will be fond memories forever for him. He won't know what to do without his football partner this year. Until we meet again, I know you are in Heaven dancing with Mommy to Star Dust. I loved having you for a friend, neighbor and wonderful Daddy.
Pamela DeVinney
July 28, 2013
love and will miss you uncle Tony Suzy
July 28, 2013
I sit here with a tear in my eye reading that Tony has past but I know He is in a better place with the the Love of his life and alot of good friends !
Michael Peterson
July 28, 2013
Showing 1 - 22 of 22 results