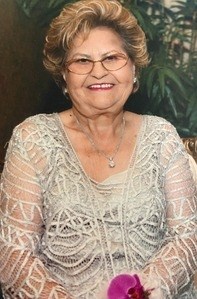 BORN
1925
DIED
2021
FUNERAL HOME
Roth-Goldsteins' Memorial Chapel
116 Pacific Avenue
Atlantic City, NJ
Kiejdan, Molly, - 96, of Linwood, and Aventura, Florida, passed away peacefully on July 12, 2021 in her home surrounded by her family. Molly, a Holocaust survivor, was raised in Vilno, Poland. She was the eldest of five children. Her siblings and parents, Reuven and Shayna Avidon, were murdered in the Holocaust. Molly survived the horrors of the Holocaust, the details of which are contained in her recently published memoir entitled, "From the Vilna Ghetto to the United States and Liberty." Molly and her beloved husband, Pinchus Kiejdan, were among the few survivors of the Vilna Ghetto. Molly, her husband and young son, Michael, emigrated to New York. aboard the SS Marine Jumper on February 16, 1949. The early years in the U.S. were challenging but they were able to thrive in the land of opportunity and freedom. Their future success was based upon hard work and accumulated knowledge. Pinchus Kiejdan became a successful builder and land developer. Molly and Pinchus gave back to society by becoming pillars of the community, including significant contributions and efforts for various educational end religious entities. Molly had a zest for life who had many interests. She was fluent and versatile in several languages. She was an outstanding homemaker, great cook, excellent sense of humor, inviting hostess and wonderful matriarch to the Kiejdan family. Molly's family members and friends are extremely proud of her accomplishments and the manner in which she achieved her goals. She leaves a legacy of strength, both physical and emotional. Molly is predeceased by her beloved huband, Pinchus Kiejdan. Molly will be deeply missed by children; Michael (Jodi) Kiejdan, Edith (Irving) Jacoby, Ralph Kiejdan, Robert (Fern) Kiejdan, Alex (Gail) Kiejdan and Renee (Stephen Rush) Kiejdan Rush; thirteen grandchildren; Sheri Kiejdan, Rachael (Ed) Meserole, Max (Elianne) Kiejdan, Sid (Stav) Jacoby, Stacie (Matt) Elias, Richard Jacoby, Adam Kiejdan, Danielle Kiejdan, Lauren Berman, Shayna (John) Dean, Tybee (Shachar) Sinvani, Paul Kiejdan and Noah Kiejdan. Eleven great-grandchildren and her companion and friend, Barbara Wawiorko. It is a Jewish proverb that "The only true dead are those who have been forgotten." Molly lives on. Graveside services will take place at Rodef Sholom Cemetery on Wednesday, July 14, 2021 at 11:00 a.m. In lieu of flowers, please make donations to Beth El Synagogue, 500 N. Jerome Avenue, Margate, N.J. Arrangements entrusted to to Roth-Goldstein's Memorial Chapel, Atlantic City, N.J. www.Rothgoldsteins.com
Published by The Press of Atlantic City on Jul. 14, 2021.
To plant trees in memory, please visit the Sympathy Store.
MEMORIAL EVENTS
Jul
14
Graveside service
11:00a.m.
Roth-Goldsteins' Memorial Chapel
116 Pacific Avenue P.O. Box 1908, Atlantic City, NJ
Funeral services provided by:
Roth-Goldsteins' Memorial Chapel
MAKE A DONATION
MEMORIES & CONDOLENCES
Sponsored by Roth-Goldsteins' Memorial Chapel.
12 Entries
So sorry to hear of the loss of your mother. Both your parents were always so good to my mom and we will never forget their kindness. May God´s love comfort and strengthen your family.
Renee Collier-Bass
August 12, 2021
Just now read about the loss of your mother! Great memories or knowing her and all of your family .I eat Mottsa balls today because of your mothers cooking them. She will be missed. Her and Dot Collier my mother.
Derek Collier
Other
July 20, 2021
Dear Ralph sending my condolences to you on the loss of your Mother. I never met her but reading about her amazing life touched me. She was truly a gift to this world!
Tina Monroe Pierce
Other
July 17, 2021
Our deepest condolences to you Ralph and family on the passing of your beloved mother. May the wonderful memories sustain you at this difficult time and be a blessing for you all.
Vicky and Harry Furman
July 16, 2021
May her memory be for a blessing
Sam& Susan Krantz
July 15, 2021
Sorry to hear about ur mother Michael
Betty Zimmerman
Friend
July 15, 2021
So sorry for your loss.
Jody Shaver
July 14, 2021
Renee and family: My sincere condolences regarding your mom's passing.
Andrea J. Katzer (nee Solomon)
Other
July 14, 2021
Our deepest sympathy Rachael on you loss of an amazing matriarch. May she find eternal peace with her beloved. Dave and Justine
Justine Larado
Friend
July 14, 2021
My deepest sympathy on the loss of a remarkable woman.. Tybee..thinking of you and your family..Much love..
Marylou Reiff
Other
July 14, 2021
So very sorry to hear of your mother's passing. I have many fond memories of her from our days in Laureldale and later in Margate. May her memory be for a blessing to you all.
Izzy Brettler
July 14, 2021
Dear Kiejdan family, Our thoughts are with you at this most difficult time. May your warm, loving memories of a very special mom and grand mom help to comfort you. May she Rest In Peace.
Sue and Michael Paymer
July 14, 2021
Showing 1 - 12 of 12 results