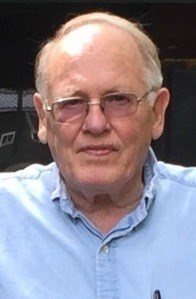 Wyman, Newton Augustine, Jr., - 80, of Somers Point, NJ & Madison, ME., passed away on February 16, 2021 after a long 2 year struggle with health issues. He was surrounded by family and much love as he peacefully left this life to join his father, mother, and sister. Newt, as he liked to be called, was born and raised in Wallingford, PA. by his parents Dr. Newton Augustine Wyman Sr. and Elizabeth Wyman, along with his older sister Barbara Mae Wyman. He graduated with a degree in Political Science from Pennsylvania Military Academy, now Widener University, which is also the alma mater of his son, father and grandfather Dr. Levi P. Wyman. Always friendly and a charmer, Newt found his way into the hearts of two women who became his wife at different points in his life. Andrea Kavchok, whom he married on August 19, 1967 and together they had three girls, Michele, Jennifer, and Elizabeth. Then his second wife, Susan Merriam, whom he married on July 5, 1980, and with whom he had a boy and a girl, Christopher and Courtney. He raised his children with his second wife in Somers Point, NJ and lived there until retirement. Newt always had a very strong work ethic and went on to start two successful businesses. The first was a construction company Wyman Clements Corporation, which he began in his early thirties when he relocated to NJ. He later went on to create Protech Home Inspections, a business that became known as one of the most thorough and reputable home inspection companies in southern New Jersey and southeastern Pennsylvania, a fact he was extremely proud of. A die hard car enthusiast, Newt was lucky enough to have owned 7 corvettes throughout his life, including an Austin Healey, El Camino and most recently his Dodge Magnum, just to name a few. He modified and repaired everything on his cars from engine swaps all the way to painting them. He even owned a small speed boat at one point which he kept on lake Wesserunsett in Maine. Newt had the ability to do just about anything he put his mind to. Besides his construction business he built a house during his first marriage for his first wife and their children in Linwood NJ. Another during his second marriage for his second wife and their children in Madison, Me., and a third house for himself to retire to in Madison, Me. His third house was built over a span of 20 years, with the help of his son and many random week long trips from New Jersey to Maine, to work on the house. Newt's love of food was unparalleled. Lobster, Filet Mignon, only the best on special occasions. He loved to eat as much as he loved to make sure everyone else around him had something wonderful to eat as well. Probably the only thing that competed with his love of food was his love of Maine. His family property on Lake Wesserunsett was an ever shining beacon in his life, and he passed this love on to all his children. Whenever he was not in Maine he would talk about Maine with this longing passion that was only appeased when he arrived back at "camp". He loved all animals, but especially dogs, cats, and birds. He had a total of 5 German Shepherds in his life, a Golden Retriever, and a cat named Obie. His dogs were copilots in whichever car he had at the time. He even persuaded one of his college professors to allow him to bring his first Shepherd to class with him! If you knew Newt you are most likely to remember a friendly, funny guy who made you feel like you had known him your whole life. Humor and wit flowed easily in his conversations, touched with a bit of sarcasm, he would always have you laughing. Needless to say, Newt will be missed immensely by those he is survived by. They are his previous wives, Andrea Wyman and Susan Merriam, his children, Michele Wyman, Jennifer Wyman, Elizabeth Wyman, Christopher Wyman and his wife Christine, and Courtney Stevenson and her husband Justin, his 8 Grandchildren, Obie the cat, and Jenna, his last and only female shepherd. Memorial Service will be Sunday 2/21/21 @12:30PM which will be live streamed via zoom at www.kelleyfuneralhome.com For those who would like to attend in person the viewing is from 11:00 - 12:30, with the service beginning at 12:30. Kelley Funeral Home, 125 Pitman Ave., Pitman, NJ 08071. In lieu of flowers, the family requests donations be made to: https://maineaudubon.org/support/give/
To plant trees in memory, please visit our Sympathy Store.
Published by The Press of Atlantic City on Feb. 20, 2021.
MEMORIAL EVENTS
Feb
21
Funeral service
11:00a.m. - 12:30p.m.
Kelley Funeral Home
125 Pitman Ave., Pitman, New Jersey
Feb
21
Funeral service
11:00a.m. - 12:30p.m.
Kelley Funeral Home
125 Pitman Ave., Pitman, New Jersey
Feb
21
Funeral service
12:30p.m.
Kelley Funeral Home
125 Pitman Ave., Pitman, New Jersey
Feb
21
Funeral service
12:30p.m.
Kelley Funeral Home
125 Pitman Ave., Pitman, New Jersey
Funeral services provided by:
Kelley Funeral Home
GUEST BOOK
0 Entries
Be the first to post a memory or condolences.