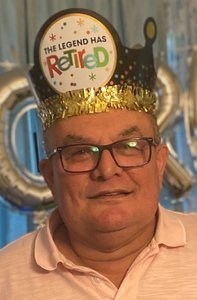 BORN
1956
DIED
2020
Quiles, Pedro "Pete", - 64, of Mullica Twp., NJ left this life unexpectedly on Tuesday, November 17, 2020. He was born in Bayamon, Puerto Rico on February 23, 1956 to the late, Felix Quiles and Carmen Perez. After graduating from Buena Regional High School, he worked various jobs until landing a custodial position making that his life long career for over 20yrs within the Mullica Township School system. Along with being a custodian, he was a school bus driver, where he was affectionately known as Mr. Pete. He recently retired in September and was making plans on living his retired life in Florida to be next to his mom. To know him was to love him. He had a sharp tongue he didn't dull for anyone. He never minced his words making it clear where he stood. He said what he meant and meant what he said. Yet beneath that rough exterior was a big burly teddy bear with a heart of gold always ready and willing to do anything for you. Especially his children and grandchildren. He accepted everyone with open arms and always made you feel like family. He is preceded in death by his father, Felix Quiles and baby sister, Myrna Williams-Quiles. He is survived by his loving wife of 40 years, Mildred Quiles; his children, Jessica Taylor (Joseph), Jared (Chrissy), and Justin (Abby); his grandchildren, Nasjir, Elijah, Joey, Nathan, Brooklyn, Justin Jr, Maiya, Richie, and Kai; his great grandson, Prince; his mother, Carmen Quiles; his brother, Felix Quiles, Jr.; his sister, Gale Velez (Orlando); along with many nieces, nephews, cousins, aunts and uncles. All whom will miss him dearly. Family and friends are invited to pay respects at a time of remembrance on Wednesday November 25th from 10:00 am - 1:00 pm at Wimberg Funeral Home in Egg Harbor City, NJ. For condolences or directions, please visit wimbergfuneralhome.com.
To plant trees in memory, please visit our Sympathy Store.
Published by The Press of Atlantic City on Nov. 21, 2020.
MEMORIAL EVENTS
Nov
25
Memorial Gathering
10:00a.m. - 1:00p.m.
Wimberg Funeral Home
400 Liverpool Ave, Egg Harbor City, NJ 08215
Funeral services provided by:
Wimberg Funeral Home
GUEST BOOK
3 Entries
Prayers and sympathy from my entire family to yours.
Syreeta Clybourn
November 22, 2020
I worked with Pete for many years . Pete you are going to be so missed.Gone way to soon.. Condolences to the family.
Sandy Davenport Crawford
November 22, 2020
So sorry to hear of Pete´s passing my thoughts are with his family! May you RIP!
Millie Parrilla
November 21, 2020