Search by Name
Charles Strauss
FUNERAL HOME
Sugarman Sinai Memorial Chapel
458 Hope Street
Providence, RI
STRAUSS, CHARLES M., 74, passed away suddenly on February 10, 2013. Born in Providence, he was a son of the late Joseph and Rosalie Strauss. After Classical High School, he graduated Harvard College in 1960, where he was active in providing piano accompaniment to Hasty Pudding shows. He received his PhD from Brown in Applied Mathematics. Most recently he was on the staff at Draper Laboratories. Among Charles' passionate avocations were gardening, sailing, music and conversation, including an ongoing catalogue of hilarious jokes. He leaves three children, Julia (Bin), Benjamin (Stephanie), and Louis (Anne); three grandchildren, Phoebe, Joseph, and Rivkeh; two sisters, Avis Goldenberg (Mal), and Ellen McKenna; his former wife Patricia Strauss, and his dear friend Judy Bickart. Also among the mourners is a vast group of friends. Charles was a family member and friend without peer, happy to open his house and welcome all with his warm hospitality. He will be vividly remembered for his intelligence, wit, and sheer joy of life. Funeral services will be held at Sugarman-Sinai Memorial Chapel, 458 Hope St., Providence on Friday, February 15th at 10:00 am, burial will be in Lincoln Park Cemetery, with a reception at the Providence Art Club following. Shiva will be private. For information and condolences, www. sugarman sinai.com.
Published by The Providence Journal on Feb. 14, 2013.
To plant trees in memory, please visit the Sympathy Store.
MEMORIAL EVENTS
To offer your sympathy during this difficult time, you can now have memorial trees planted in a National Forest in memory of your loved one.
Funeral services provided by:
Sugarman Sinai Memorial Chapel
MAKE A DONATION
MEMORIES & CONDOLENCES
40 Entries
I just discovered this trove of remembrances of Charles. He was one of my professors at Brown in the early '70s and a friend ever since. If I could attach a photo, it would be of my 60th birthday on January 13, 2013, with Charles, along with Andy van Dam. I think about Charles every day.
Paul Anagnostopoulos
Friend
November 12, 2017
We were dear friends for over 50 years. I'll never forget Charles, his cousin and I playing music together and having wild rubber band fights in the computer room at RCA in 1962. We always said one day we'd write a Broadway show together. My husband and I stayed with him for several days the summer before last, enjoying each others' company so very much. I'll miss him sorely, sorely - he was a one-of-a kind treasure! Susan Bergman Meehan, W'60
August 12, 2014
I loved Charles' classes. I enjoyed standing at the piano as he played for all of us. And most of all, I have been fascinated by his work with Bischoff and think about him and this work often. He will be missed by many.
Hal Holbrook
January 23, 2014
I just learned of Charles's death. He taught several classes I took at Brown in the '70s and was always a dynamic and fascinating presence, one of the most unforgettable people I ever knew. It saddens me to know that he is gone.
Alan Winson
January 23, 2014
Dear Avis and Ellen,
We were so sorry to learn of your brother passing away. Please accept our condolences.
Bette & Arnold Saslavsky
March 8, 2013
I just found out about Charles. He was my friend since 1965 when we met at Wolf Research in Washington. It's hard to believe that he - and his wonderful, warm, funny spirit - is gone. My condolences to his family and all his other many friends.
Lelah Willoughby
March 7, 2013
So sorry to hear about Charlie - I got to know him through music and having him at the Jazz Camp in CT I taught for a couple of years. He was always upbeat and energetic!
John Clark
February 20, 2013
Charlie was a regular attendee of our class of 1960 bimonthly luncheons. He always regaled his fellow classmates with the
most entertaining stories, told with such wit and panache. Our
future luncheons will never be the same without Charlie. His passing is a tremendous loss to his family and friends, and to
all his classmates. Charlie, you will always be there in our thoughts and memories.
David Kopelman
February 20, 2013
Pat,
With deepest sympathy to you and your family,
Chris Streubel, LHH Alumni
February 20, 2013 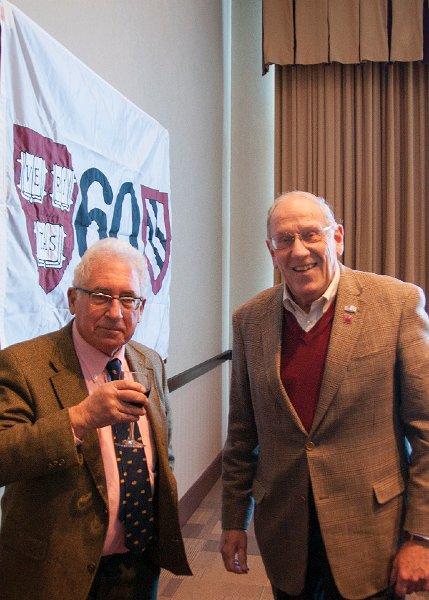 Charles was known to, and beloved by many of his Harvard Class of 1960 classmates, especially by all of us who have been regular attendees at our Class luncheons in the Greater Boston Area. Indeed, since 1992, Charles attended seventy (out of 106) luncheons, more than all but three classmates. But mere numbers hardly suffice. Yes, Charlie reveled in the luncheons (see his write-up in the Harvard and Radcliffe Classes of 1960 Fiftieth Anniversary Report) and, yes, there he received much affection and, once when under extreme distress, caring comfort (those who attend the luncheons comprise what is truly a male support group). But, he contributed so much to all of us! Never was he devoid of humor nor was he reserved when invoking his unique and upbeat outlook on life!

I am grieving. I know I will miss him at all of our future luncheons.

My condolences to Charles' family and all his friends.
Henry Marcy
February 19, 2013
Charles was an amazing person - so full of life and joy. I believe that we can all learn from his love of life. Although I had only met him a few times, he made a deep impression on me. My prayers and thoughts go out to the family.
Sharon Denson
February 18, 2013
I didn't know Mr. Strauss well, but I still feel the loss. I enjoyed being a part of conversations with him. He even introduced me to a book that later became the basis of a speech I needed to make at work. I spoke in front of thousands of people and it was a success in part because of his inspiration.
My condolences to everyone.
Heidi Fowler
February 18, 2013
What a loss for humanity! Whenever I saw Charles, he had a smile on his face and kind words to say. He will be greatly missed. Charles was my mother, Rose's, star piano student!.
Sincerely,
Stanley Freedman
February 17, 2013
A candle was lit today in Memory of Charlie. His intelligence, enthusiam,talent and wit will be remembered forever. Our prayers are with his family.
Pat & Diana M.
February 17, 2013
Avis.....we were so sorry to hear of your brothers passing. Our thoughts and prayers are with you and your family. Linda and Marty Flamer
February 17, 2013
From an old friend at Broad St School, I send condolences to you on the loss of Charlie.
With fond memories of your family,
Lillian Norton Johnson
Classical'55
February 16, 2013
We send our deepest sympathy to the entire Strauss family.I remember him as a child;he was very bright and full of energy. Our regards to the family.
Fran & Don Yarlas
February 16, 2013
I was fortunate to be teamed with Charles at Draper Lab for the last three years on a project whose success is due to Charles. He made tough stuff easy, and would guarantee a solution to any problem in '15 minutes'. On business trips the day would end with good food, drink, cigars, and Charles' wit, wisdom and jokes. I will miss him and I'm a better person for knowing him.
My deepest condolences to his family.
Ron Cucchi
February 16, 2013
Charlie made light work out of heavy subjects, his humor and
wit drove out the gloom and fog from many frustrating and confusing
times. I'm happy I had the chance to work with him, I learned a lot
and enjoyed being his friend.
John Lupien
February 15, 2013
Charlie was truly the life of the party wherever he went. His wit, wisdom, energy, and enthusiasm will be sorely missed
Art Hovey
February 15, 2013
When I first joined engineering at Draper Laboratory, I was assigned to Charlie's group. On my first day Charlie walked into my office holding a rubber chicken, introduced himself to me and said, "let go have drinks after work". That was +18-years ago. Charlie was my colleague, at times a mentor, and most importantly he was always my friend. I am a better person for having known him and I will cherish the memoirs of our times together for all of my days.

I will miss you my friend.

With my deepest condolences to Charlie's other friends and Family,

([email protected])
Jeff Cipolloni
February 15, 2013
I am so very sorry for your loss. Charles will truly be missed but even more so be remembered. I had the privilege of working with Charles and I always enjoy every minute. He was so smart and witty and eager to help in any way he could. Such an interesting man and yet so humble; I had no idea of his accomplishments. I feel blessed to have spent time with him.
Brian Vatcher
February 15, 2013
Thank you to Julie, Lou, Ben, Ellen, Avis, and RickV for a wonderful tribute to Charles. I am still sad but I'm also smiling. L'chaim to you all. (am I allowed post 2x?)
Robert Dorin
February 15, 2013
My deepest sympathy and prayers to you all.
Baruch dayan emet

Jeffrey Diggins
jeffrey diggins
February 15, 2013
I was privileged and honored to have been his classmate at Classical High School,and now I am saddened by his passing,at such a young age.

You made computer science a riot, which set me and many others on a lifetime course.
Ed Lazowska
February 14, 2013
Avis and Ellen,
My condolences on the loss of your brother. My thoughts and prayers are with you and your family.
Kelly Azera
February 14, 2013
Ellen and Avis, I am so sorry to hear of your loss. You will all be in my prayers.
Carol Brenek Fontaine
February 14, 2013
Julie, and all of Charles's family,

Our thoughts are with you. Charles was a true original, and every one who knew him will miss him