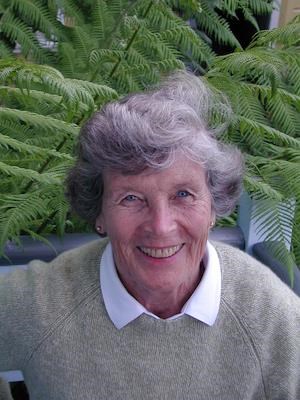 Chambersburg - Eleanor (Beeb) Nelson Good died February 4, 2021 three days before her 99th birthday, lovingly cared for in her last days by her daughter Susan Jewett and her sons Tom and Tim and their respective wives Jan and Rhonda.

Beeb was born and raised in Chambersburg by her parents Robert and Beulah Nelson. She graduated from Penn Hall prep school, founded by her grandfather, and began nursing studies in Philadelphia until persuaded by the love of her life, Jack Good, to leave school and marry on Nov 11, 1942 and move with him to the high mountains of Colorado where he was training with the Army Ski Troops. After the war they returned to Chambersburg, where she lived for the rest of her life.

It is hard to distill into a few paragraphs the events and significance of her almost 100 years.

She would want to be remembered for her 66 years loving marriage to Jack, who died at 90 in 2008; for her love of and dedication to her religion: her years of service to her church as a deacon and elder, her long commitment to the prison and migrant ministries; and for her role as supermom in birthing, raising and successfully launching six children who have produced 16 grandchildren and 6 great grandchildren (so far).

We remember her stunning cornflower blue eyes and good looks, her stealth attacks followed by that satisfied smile at the card table, her ability to "put up" basket after basket of garden produce that Jack would harvest and bring to the kitchen.

She taught us to drive stick shift and play tennis, prepared wonderful feasts, nursed us through measles and broken bones, went to bat for us at school and defended us against criticism from ultra-conservative relatives, and took our side when we wanted vacation at the beach instead of fishing in the mountains.

Her generosity was impressive. You knew you were welcomed and loved no matter what hour you arrived: a freshly made bed, a plate of food on the counter, some of your favorite treats in the fridge. There was always room in the house for one more: it was a gathering place for young friends, and a home away from home for cousins over the years.

For 62 years she lived in and lovingly cared for the house that she and Jack had built in 1949 on Coldbrook Avenue, overlooking the Falling Spring stream. When living alone in a 3 story house became too dangerous she moved into a cottage at the Menno Haven retirement community on the property which formerly housed Penn Hall.. Her father had been Penn Hall's business manager and athletic director and her cottage was situated on what used to be the fairway of the 7th hole of his golf course. It seemed appropriate that she would spend her last years in a place with such rich family memories.

We, her family, are extremely appreciative of the support and care she received from the staff at Menno Haven during the last 10 years of her life and we are in awe of our sister and brothers who brought her home for her last 5 days surrounding her with love and care.

There will be a Graveside Memorial Service on Thursday August 11 A 11:00 am at The Presbyterian Church of the Falling Spring's Cemetery.


Published by Public Opinion from Feb. 11 to Jul. 31, 2021.
To plant trees in memory, please visit the Sympathy Store.
MEMORIAL EVENTS
To offer your sympathy during this difficult time, you can now have memorial trees planted in a National Forest in memory of your loved one.
Funeral services provided by:
William F. Sellers Funeral Home
MAKE A DONATION
MEMORIES & CONDOLENCES
Sponsored by PublicOpinionOnline.com.
5 Entries
Jan and Tom,
I’m so sorry for your loss.
Jeanette McCans
Acquaintance
February 27, 2021
I had the privilege of working with Beeb in the prison ministry years ago. She was always there to listen and to give help in anyway. I appreciated all the work she did in getting God's Word to the inmates.
She will be remembered as a friend and a servant of God.
Cindy Barges, Malachi Ministries
Friend
February 23, 2021
She was a wonderful woman who I have known almost my entire life. I was always welcomed into Beeb and Jack’s home. Feel privileged to have known her and share some of the loss of her family.
John Cree
Friend
February 15, 2021
Families of Beeb, sorry to hear of Beeb passing, she was very nice lady.
I had the honor of help taking care of her over the years at Chambers
Pointe (Penn Hall) PC. My sincere sympathy may God be with each one of you.
Terry S. Brame
February 13, 2021
Tom and Jan and family. My deepest sympathy for your loss of a beautiful lady. Your mother always had a smile when I would see her.
Marguerite L Fries
Acquaintance
February 11, 2021
Showing 1 - 5 of 5 results