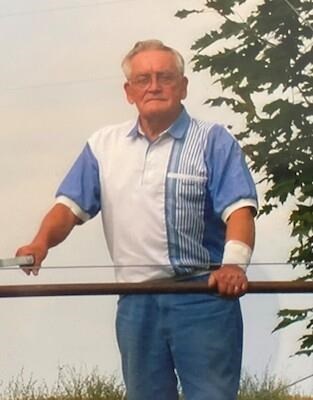 Chambersburg - Jerry Ray Defenderfer, age 90, of Chambersburg, PA, went to be with his Lord and Saviour on Tuesday, July 20, 2021, at his home with his family by his side. Jerry was born on March 10, 1931, in Chambersburg, PA, the son the late Robert E. and Carrie Gelwicks Defenderfer. Jerry was a graduate of St. Thomas High School. He was veteran of the United States Navy. He was employed by Letterkenny Army Depot until he retired in 1986.

Jerry was a member of the St. James United Brethren Church in Chambersburg, PA. He was a craftsman at heart. Jerry was the founder of the miniature carousel club of which his passion was building carousels to display. He loved creating and building. Jerry lived life to the fullest.


Published by Public Opinion from Jul. 22 to Jul. 23, 2021.
To plant trees in memory, please visit the Sympathy Store.
MEMORIAL EVENTS
Jul
31
Visitation
10:00a.m.
St. James United Brethren Church
PA
Jul
31
Celebration of Life
11:00a.m.
St. James United Brethren Church
2398 Warmspring Rd, Chambersburg, PA
Funeral services provided by:
Kelso-Cornelius Funeral Home, Inc
MAKE A DONATION
MEMORIES & CONDOLENCES
Sponsored by PublicOpinionOnline.com.
1 Entry
Sally, Karen, & Kathy; We all are deeply saddened to hear of our "Master Builders" passing. Jerry was a Saint in all our eyes. The true definition of a SERVANT. Never one to turn away anyone in need. JERRY was a true friend to me and our Family. I will truly miss my "Master Builder". Arthur Carter and Family
Arthur Carter
Friend
July 23, 2021
Showing 1 - 1 of 1 results