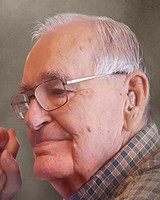 BORN
1929
DIED
2021
FUNERAL HOME
Dysart-Cofoid Funeral Chapel
208 S Mccoy
Granville, IL
Coye M. Salsman
Born: December 27, 1929 in Buffalo, KY
Died: July 31, 2021 in Ottawa, IL
Coye M. Salsman, 91, of Granville passed away on Saturday, July 31, 2021 at La Salle County Nursing Home, Ottawa.
The funeral service was Saturday, August 7, 2021 at Dysart-Cofoid Funeral Chapel in Granville. Burial with military honors was at Putnam Cemetery, Putnam.
Coye was born on December 27, 1929 in Buffalo, Kentucky to Hobart and Gertrude (Farmer) Salsman. He married Grace Thomas on December 2, 1950.
Coye served in the United States Army in the Korean Conflict.
He was the owner and operator of Coye's Service Station in Granville, and prior to owning his own business he worked at the Ford garage in Tiskilwa. Coye was a board member for the Granville Grade School, the town of Granville and his church.
Survivors include one son, Ron (Mariam) Salsman of Granville; two daughters, Sandi (Daniel) Lawrence of Ottawa and Kathie (Ken) Allen of Tiskilwa; three brothers, Elmo Salsman of Wyanet, Charles Salsman of Walnut and Robert Salsman of Peru; six grandchildren, 13 great-grandchildren and two great-great-grandchildren.
He was preceded in death by his parents; his wife, Grace; sister, Ruby; and grandson, Steven.
In lieu of flowers, contributions may be directed to the Alzheimer's Association.
Pallbearers will be Ron Salsman, Ernie Eden, Stephen Gibson, Daniel Lawrence, John C. McKirgan and Jarod Lawrence.
Online condolences may be made to his family at www.dcfunerals.com

Published by Putnam County Record from Aug. 3 to Aug. 11, 2021.
To plant trees in memory, please visit the Sympathy Store.
MEMORIAL EVENTS
To offer your sympathy during this difficult time, you can now have memorial trees planted in a National Forest in memory of your loved one.
Funeral services provided by:
Dysart-Cofoid Funeral Chapel
MAKE A DONATION
Please consider a donation as requested by the family.
MEMORIES & CONDOLENCES
Sponsored by Dysart-Cofoid Funeral Chapel.
0 Entries
Be the first to post a memory or condolences.