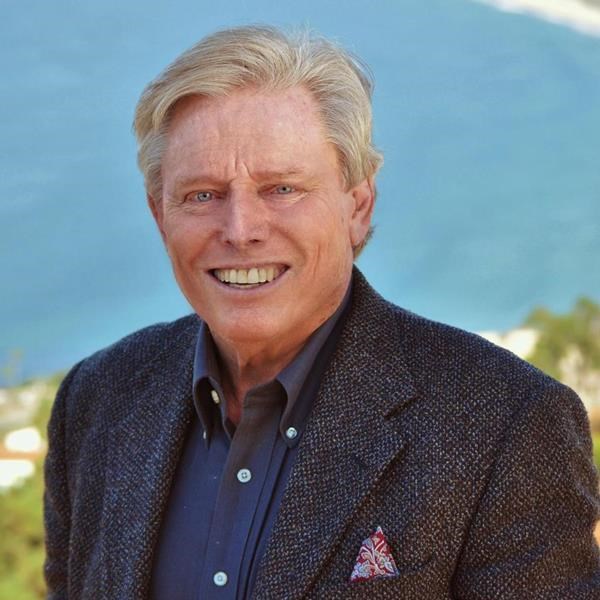 BORN
1950
DIED
2021
Bruce was born on February 8, 1950 to Lon Marshall Megowan and Louise Marie Sanders. Bruce had battled Cancer and Parkinsons for over 20 years, succumbing to a debilitating stroke on October 9, 2021

The family moved from Encino to Newport Beach in the mid 60's, where he attended High School at Corona Del Mar. Diagnosed with a chronic, and permanent, case of tennis elbow in his dominant right arm his sophomore year, he relearned how to play the game left-handed and made Varsity at this perennial tennis mecca his senior year.

Bruce's love of Los Angeles sports, particularly USC football, his alma mater (regardless of performance, season ticket holder since his graduation in 1972), annual boat trips to Catalina with his best collegiate friends, sunny golf outings at Los Verdes and PV Country Club with his sons, and blue-bird, Sierra Nevada powder days at Mammoth, were surpassed only by his deep love for his family - and a full-spread, home-cooked brunch. He was the best kind of contradiction: an accountant by nature who loved order, detail, and diligent, highly efficient work, but whose friends and family knew him as a "big softie" with a bottomless warmth of presence.

Bruce married Maureen Donnelly on July 7, 1979. The two met at the legendary Tom Bergins on Fairfax, and have celebrated 42 years of Marriage

Bruce began his career after graduating from the University of Southern California in 1972 with a B.S. in Accounting, summa cum laude, spending nine years as a C.P.A. with Touche Ross & Co., since acquired by Deloitte, serving real estate clients. Bruce received national honorable mention for his performance on the CPA exam. During that time, he earned an M.B.A. in Real Estate Finance, also from USC, and became a licensed real estate broker. Bruce was a born leader in everything he did. He was President of BOMA Greater Los Angeles from 1999-2000, and was Treasurer and Board Member of LACRA .For 20 years, Bruce served as a senior executive for several large real estate development companies and pension fund realty advisors, including Cadillac Fairview, Oxford Properties, Standard Management Advisors, The Yarmouth Group and Chadwick Saylor & Co.

Since his cancer diagnosis in 2002, Bruce worked with his wife Maureen in residential real estate in the South Bay. Following his retirement from the commercial real estate industry, Bruce became an avid local historian and co- authored "Historic Tales from Palos Verdes and the South Bay." Bruce was also the leading advocate and organizer of the first off-leash dog park on the Palos Verdes Peninsula, adjacent to the grounds of RPV City Hall, and is known as a local hero to high-energy canines everywhere.

In lieu of flowers, please consider a donation that was close to Bruce's heart, The Las Trampas Organization for Adults with Developmental Disabilities; LasTrampas.org/ways-to-donate
Published by Palos Verdes Peninsula News on Nov. 8, 2021.
MAKE A DONATION
MEMORIES & CONDOLENCES
5 Entries
I served on the Board of the Los Angeles Commercial Realty Association with Bruce and knew him throughout the years participating in the many events of that organization and other real estate events. He always had a smile on his face and a warm and welcoming demeanor. Know he had a wonderful family and the love of many friends. Rest in peace Bruce.
Lisa st john
Other
November 11, 2021
Maureen, we are so sorry for your loss and know that Bruce will be missed by your entire family, friends and colleagues. I am sad I am unable to attend the service tomorrow, but am thankful that the Point Vicente Chapter NSDAR will be represented.
Debbie and Rafael Amaro
Friend
November 11, 2021
Bruce has been a close friend since our fraternity days at USC. He will be dearly missed, but happy memories will live on. Rest In Peace, buddy...
Stephen Rasch
School
November 11, 2021
I am friends with Bruce´s son, Ryan. Ryan gave me Bruce´s number and I called him one day to discuss my melanoma diagnosis. He picked up the phone, unaware of who was on the other end and told me his story. His words were filled with wisdom and hope for a future I was certain did not exist. One conversation with Bruce changed my life forever and made me a better person, a better survivor and gave me the courage to learn how to cope with uncertainty. We conversed on Facebook from time to time and he also agreed and helped others I ran across in the melanoma community who needed to hear his story. I called him my Obi Wan. My hero of survival and my strength. He will be missed. My deepest sympathies to his family and friends. He was extremely special. Thank you for taking my call, Bruce. It meant a lot.
Sarah Stanick
Friend
November 8, 2021
We were shocked and saddened to hear Bruce had passed. Our deepest sympathy to his family.
Jim and Kathy York
November 8, 2021
Showing 1 - 5 of 5 results