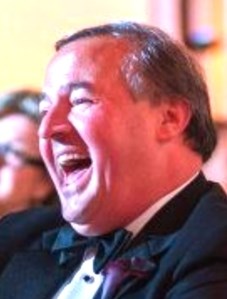 Daniel Bradford Gorham, 63 years old, passed away in New York City after one final family hospital hangout, on August 19, 2021. Dan resided in McLean, Virginia with his beloved wife of 34 years, Michela Gorham. Dan was born in Torrance, California and grew up on the Palos Verdes Peninsula. He was the family "caboose," the fifth child of Robert Lyle Gorham, a pilot, and his wife, Dee Raguse Gorham, a flight attendant. After a short stint at USC, Dan graduated from Pepperdine University, as he claimed to have much preferred Malibu. You can take the man out of California, but you can't take California out of the man. Until the very end, he remained closest friends with his Lunada Bay kindergarten crew, basked in his glory days as the PVHS Sea Kings' student body President, told incredible stories of celebrities he waited on at La Scala, and dreamed of partially retiring in Santa Barbara. He had a long career in real estate finance and was an early investor in Senior Housing and Assisted Living. As an entrepreneur he co-founded Fountain Square Properties in 2003 and Kensington Senior Living in 2010. Supported by his wife and family, he built both companies with longtime friends and a longstanding happy hour at Morton's. He was never afraid to step into an opportunity or bestow a nickname. He radiated confidence, honesty, integrity, and fun. Dan was a loving husband, tremendous friend and devoted dad and grandfather. He greatly enjoyed watching his children and grandchildren play sports, and cultivated a rowdy sideline culture wherever he went. No referee ever got away with a bad call in his presence. He reveled in time spent further afield with his wife, Michela. After meeting in an airport, marrying in Maui and moving cross-country, they continued to travel extensively during their first 30 years together. More recently, they enjoyed time closer to home with grand-babies and renovating their farm in the beautiful Virginia hunt country. Dan is survived by his wife, Michela Gorham; daughters: Caitlin Gorham Wheeler (W. Robert Wheeler) and Caroline Gorham; son, Spencer Gorham (Annie Goodyear); sisters: Janice Gorham, Suzanne Gorham, and Jean Patrice Gorham (Rob Brenner) and four grandchildren: Nathaniel, Grace, Nolan and Garrett. A private celebration of life is planned for October 9, 2021 in Rancho Palos Verdes, California. In lieu of flowers, the family kindly asks memorial contributions be made in Dan's name to the two organizations that took incredible care of him and will continue to do research to make sure the disease that took his life, CJD, will be cured. Memorial Sloan Kettering Cancer Center: http://mskcc.convio.net/goto/DanielGorham CJD Foundation: https://secure.qgiv.com/event/cjdfoundation/account/1147965-DanGorham

Published by Palos Verdes Peninsula News on Sep. 15, 2021.
To plant trees in memory, please visit the Sympathy Store.
MEMORIAL EVENTS
To offer your sympathy during this difficult time, you can now have memorial trees planted in a National Forest in memory of your loved one.
MAKE A DONATION
MEMORIES & CONDOLENCES
Sponsored by Daily Breeze.
1 Entry
Thoughts and prayers to the Gorham family.
Samuel Oliva and Elliott
Friend
September 17, 2021
Showing 1 - 1 of 1 results