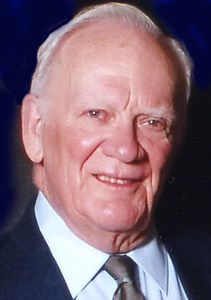 BORN
1929
DIED
2021
Nov. 15, 1929 - Aug. 12, 2021 George Bowman, 91, was born in Greenville, Ohio, to George W. Bowman Sr. and Merea Miley Bowman. George remained in Greenville through high school graduation, and though his primary focus was in math and science, he enjoyed music and mastered the accordion as well as theatrical arts, earning a musician's union card as a teenager. After a year at the University of Cincinnati, George enrolled at the United States Military Academy at West Point, N.Y., graduating in 1952. He married Mary Elaine Kirtland -- whom he met through a cross-country correspondence -- in Seattle in 1953, and in the years that followed served his country proudly in Korea and at various U.S. Army bases before settling in the South Bay and joining McDonnell-Douglas Corp. as an aerospace engineer and technical writer. He remained at McDonnell-Douglas (later Boeing) until his retirement, when he and Elaine moved to Lompoc, CA in 1987. George and Elaine raised their three children in Redondo Beach: James, David (LeNore) and Kathleen (Peter) Gonzalez. George was a hands-on father and an outstanding role model, serving as master of David's Cub Scout troop and a parental advisor for Kathy's Job's Daughters group. George exemplified unlimited patience and compassion toward James, who had Down Syndrome, and taught his children to be kind and accepting to all. He was always available to guide and support his family and to cheer them on with wisdom, enthusiasm and a quiet yet witty disposition. George's wife Elaine died in 1998, and he was lucky to find another amazing woman in Audrey Hudson, a fellow docent at La Purisima Mission in Lompoc. They were married in 1999 and relocated to Laguna Woods, Calif., in 2016 to be near their blended families. His passion was stamp collecting, and he won many awards at international shows. His diverse interests also included world travel and running a successful tienda at La Purisima. He was an usher and leader at St. Cross Episcopal Church in Hermosa Beach and, later, active at St. Mary's in Lompoc. He taught his kids to fish, ride a bike, throw a ball, drive a car, balance a checkbook, play Beatles songs on the piano, cheer local pro sports teams, love life and live in integrity. He will be greatly missed, and he will live forever in our hearts. George is survived by his wife Audrey; son, David; and daughter, Kathy. A Celebration of George's life will be held at a later date.

Published by Palos Verdes Peninsula News on Sep. 5, 2021.
To plant trees in memory, please visit the Sympathy Store.
MEMORIAL EVENTS
To offer your sympathy during this difficult time, you can now have memorial trees planted in a National Forest in memory of your loved one.
MAKE A DONATION
MEMORIES & CONDOLENCES
Sponsored by Daily Breeze.
0 Entries
Be the first to post a memory or condolences.