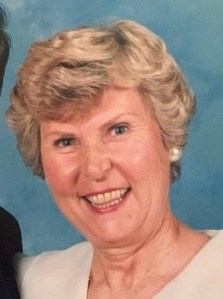 BORN
1935
DIED
2021
FUNERAL HOME
McNerney's Mortuary - San Pedro
570 W 5th St.
San Pedro, CA
Feb.16, 1935 - Nov. 9, 2021 Geraldine "Janie" Cracchiolo passed away peacefully on November 9, 2021, at the age of 86. A lifelong resident of San Pedro, Janie was born in her home to Ivan and Ursula Trutanich on February 16, 1935. She was the youngest of four children, and with her ever cheerful personality, she was considered the darling of the family. She graduated from San Pedro High School and later married her sweetheart, Joe Cracchiolo. It was a love story for the ages. Janie and Joe were married for 62 years, until Joe's passing in 2019. Janie was a dedicated wife and mother, and when she became a grandmother she was over the moon. Together with Joe, she enjoyed movie nights with their best friends, and social dinners at Mary Star of The Sea parish and the Elks Lodge. Janie's hobbies were gardening, cooking, and baking. Friends and relatives will always remember her delicious holiday feasts, and her apple pies which were often made with apples from the Beverly Hills apple tree in her own backyard. Janie is survived by her children, David Cracchiolo, Susie Newton, and Linda Schwartz (Doug), as well as her grandsons Alex and Jason Schwartz. There will be a gravesite interment at Green Hills Memorial Park on Western Avenue at 10:30 AM on Monday, November 22. A separate Celebration of Life will be announced at a later date. In lieu of flowers, the family requests donations be made to Alzheimer's Foundation of America at alzfdn.org, or to the charity of your choice. If you would like to reach out to Janie's children, please email [email protected] You are invited to sign the guestbook at mcnernysmortuary.com.

Published by Palos Verdes Peninsula News on Nov. 18, 2021.
To plant trees in memory, please visit the Sympathy Store.
MEMORIAL EVENTS
To offer your sympathy during this difficult time, you can now have memorial trees planted in a National Forest in memory of your loved one.
Funeral services provided by:
McNerney's Mortuary - San Pedro
MAKE A DONATION
Please consider a donation as requested by the family.
MEMORIES & CONDOLENCES
Sponsored by Daily Breeze.
1 Entry
My deepest sympathy to your families on the passing of your beloved mother. My mom, Stella Valdez, was a friend of your mother, as well as Ann Relstab. I remember meeting your mother at my dads funeral in 2009. God bless you all.
Christi Valdez DeVico
Other
November 21, 2021
Showing 1 - 1 of 1 results